I first met Chris Delia of Carillion guitars at UK Tech Metal Fest back in the July of 2015 in the rural setting of Newark show ground, but I didn’t know I had a the time. I was stewarding at the festival of around 1,000 people and also had in my possession a demo guitar made by Dylan from Daemoness that was attracting a bit of attention from players who wanted to feel what the guitar had to offer. 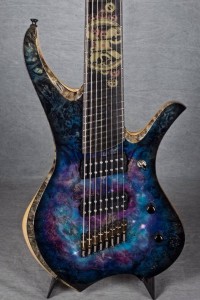 After some introductions, conversation and time spent playing around with the guitar Chris told me a little back ground about Carillion guitars, some around artists who were endorsing the brand and offered me a chance to take a trip down to his workshop. Definitely something I was interested in doing so I was conscious that although time tends to pass fairly quickly, this wasn’t something I wanted to forget about.

I’d heard about the Carillion brand already from a friend of mine who is passionate about guitar building. I was instantly impressed with what I was looking at on the Facebook page – imaginative designs, colourful quilted tops, intricate inlay work to name a few; features on not just electric but acoustic instruments. The picture that stuck in my mind was of a guitar with a beautifully insane purple and green quilted finish, known as the Pandora burst. 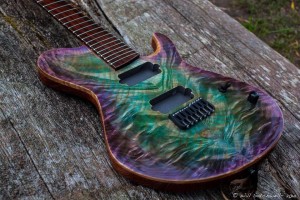 So with that memory in mind it was clearly time to set a date when we both had some spare time and take a visit to a small village just outside of Dorking in Surrey. I was quite excited.

After making my way across the country and through the car park otherwise known at the M25 I was hit by the surroundings of the location and instantly understood why someone would want to live there. Imagine the rolling hills of England in autumn coupled with historic country cottages and buildings in the relative quiet silence of the middle of nowhere, and you’re probably pretty close. Good start.

The first thing that struck me about the Carillion workshop was the intimacy of the place, but it was just as I was expecting. A humbly small workshop of 1 up and 2 down in a converted barn with various bits of large machinery and a shitload* of wood.

(* – Technical term for the quantity of wood/materials Chris actually has).

So whilst Chris made the first cup of tea of the afternoon I got my hands straight onto a Polaris 7 baritone that was sat on a stand in the office area of the workshop. The purple finish, named the Chtulu burst, caught my eye and the inlayed burl that he used as a sunken scratch plate looked pretty damn cool. The alternative colours of the wood running up the fretboard stuck out pretty solidly too. I was happy to find the guitar loaded with Blackhawk BKPs, a hipshot 7 fixed bridge and Sperzel locking tuners. 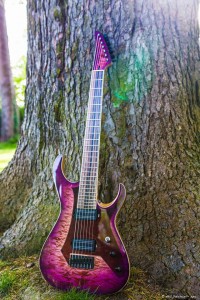 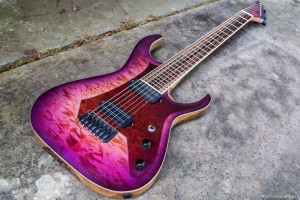 The body of the guitar was relatively thin which I found very comfortable, 35mm in total which went superbly with the contouring and profile of the neck. Chris uses a technique of shaving off the neck “shoulders” to help thin out the profile of the neck which appears to do a great job in making it very accessible and easy to play.

Now, I’ve never really been a 7 string player as I’ve always had a little trouble adjusting to the thickness / flatness of various necks… plus the fact some strange part of me just doesn’t get on with odd numbered strings – however, I was at ease with this guitar quite quickly. Another good start.

As the conversation continued I moved onto a 6 string model that was born quite a while ago and had some quite interesting design work and shapes going on. Another double cut away but this time with a lower hanging bottom horn, fitted with a floating bridge and also had a nice binding down the fretboard.

I could appreciate the guitar was an earlier piece of work as it didn’t seem to align hugely to the newer models that Chris was offering, but that said it was still comfortable to play and definitely a looker.

The next guitars I was shown were 2 example models for a stock run Chris has just opened up. These guitars are nothing fancy in regards to top, finish or custom options; they are designed to be purely simple, functional and highly playable guitars and the price point of the instrument reflects this approach.

A Polaris 7 was handed to me first and felt slightly more comfortable than the first purple 7 I’d picked up. I got on with the neck so well I was playing away on it for around 15 minutes before realising I still had it in my hands during our conversations. 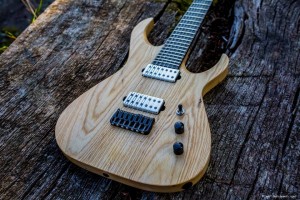 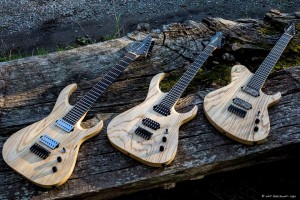 The action was setup low but not without bite, the control knobs and switch on the guitar stayed out of the way and the choice of hardware is solid. Bareknuckle pickups, Hipshot Bridge and Sperzel locking tuners. The guitar itself is hand crafted and finished to the standard you’d expect from a high end custom instrument, but with a reasonable price tag.

Chris explained he will charge for the labour of a stock, functional model of guitar but will only upcharge to cover the cost of additional and custom materials and parts, at face value with no additional mark-up. Admirable, and something it took a while to get my mind around being a business owner myself.

Over the last 20 years I’ve owned and played a lot of guitars, I’ve tried many varieties of 7 strings and still own a fair few to this day; Mayones, Carvin, EBMM, various Ibanez and ESP, Aristides and so on, to name a few. Believe me when I say that what I played during my visit is functionally comparable to high end stuff as is the build quality.

In fairness it may well be that a lot of it is down to personal preference and how you want to use an instrument – so, what I will say is, if you’re an Ibanez or Mayones kinda person that enjoys the benfits of a comfortable “C” style neck for playing a variety of musical styles but also has a penchant for the odd bit of speed, shred or sweeping… you can’t go wrong with one of these.

The feature that made the neck the most comfortable and impressive for me were the shaved shoulders. Chris explains that he takes the rounded nature of the neck away slightly by cutting in at 45 degrees either side and then smoothing the whole thing back out. It works, one of the best 7s I’ve played and has helped me to articulate exactly what I do and don’t like about neck profiles.

I didn’t pick up the second model on the wall, a single cutaway with a slightly more rounded body – I didn’t need to. I was fairly sure I wanted one. 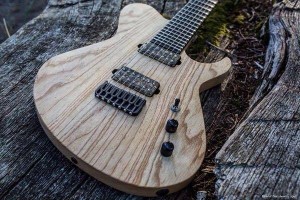 Being a guitar workshop there were a few more around, I was shown a guitar that was made fairly recently for a local gent I’d actually gigged with a little in the past. This was a slightly thicker bodied Polaris 7 model made as a custom with a figured Padauk top and some insane inlay work that illuminated in the right conditions.

One simple volume control, no tone and a selector switch meant the guitar was functionally very efficient as well as attractive. Given this actually belonged to someone I didn’t hold on to it for too long and gave it a good wipe down after. 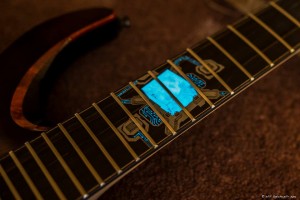 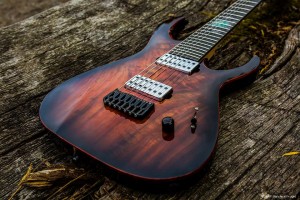 We then took a trip upstairs to the main building area of the workshop where Chris showed me a couple more guitars that were in creation including an acoustic with some great inlay work and some very old, very hard to source Rosewood that Chris had squirrelled away for years awaiting the perfect project. I don’t have any direct pictures of the guitar I saw but it was very similar in design to the guitars shown below. 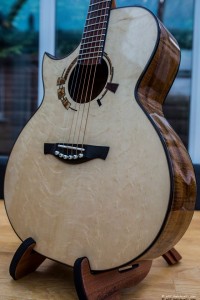 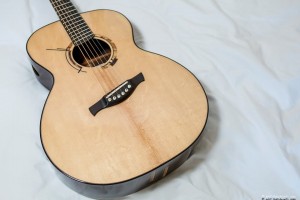 The ability and knowledge in regards to sourcing hard to find materials is something Chris excels at. Previously being in the profession of re-sawing wood has clearly provided some great contacts and exotic pieces of wood – the most impressive I was schooled on during my time is aged Bog Oak with unique figuring. Something quite rare that will sit extremely well on top of a prospective customer’s custom instrument in the near future.

Chris is also working on a few models for upcoming shows in 2016 and, being burdened with the infinite pain that is being a lefty it must be quite useful to be able to create a guitar for himself. So he is. The guitar isn’t quite finished but as it stands right it’s a 7 string model with an Alien theme. The inlay work is instantly recognisable as Ripley looking fairly distressed with an up-close meeting with her favourite breed of Xenomorph. The body is topped with a slime green coloured burl that gives a very effective depiction of alien blood. 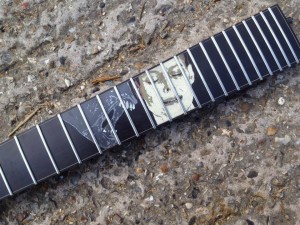 The visit to the workshop was definitely an eye opener into the world of an educated luthier that really takes pride in what they do and enjoys work enough to go into the office 7 days a week. Aiming for an output of around 35 guitars a year from the workshop will never make anyone a fortune but what it does provide is infinitely important – the satisfaction of knowing you truly enjoy what you are doing with life.

One of the quickest and most important ways to grow a talent is to receive and act on constructive feedback, something a lot of people seem either opposed to or unable to accept. Chris seems very open to doing so and the process of having other experienced luthiers appraise his past work appears to have improved the quality of output in the years he’s been building the brand. It shows. 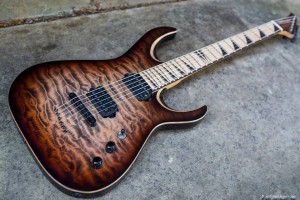 There will be an opportunity for people to get in on an upcoming run soon that will be kicking off for people who want to get their hands on one of the functional builds shown earlier on in the article. The run will be limited to 10 pieces and will be on a first come first served basis, I can only suggest you check it out!

Thanks a lot to Chris for inviting me down, providing quality tea and biscuits and allowing me the access to see inside the world of Carillion guitars. The output over the next couple of years is something I will definitely be keeping my eye on. 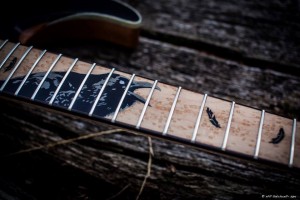 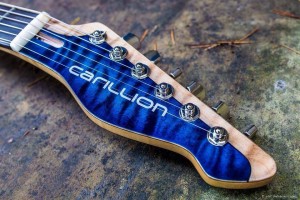 P.S….we are now authorized dealers for most major brands, take a look at what’s new here.