Active vs. Passive Pickups – An Introduction

Are you trying to figure out what the difference is between an active and passive pickup?  Let’s start off with what exactly a pickup is.  A pickup is a transducer (converts a signal from one source to another e.g. electrical, mechanical, thermal and acoustic) that captures mechanical vibrations from the strings and converts them into an electrical signal. That electrical signal is then amplified.  The main pickup designs are single coil, humbuckers and now humbucking single coils. The reason for the noise-less single coils is due to the classic design where the pickup would pick up interference and hum, hence the term humbucking (hum canceling).  To offset the interference in single coil pickup design, humbucker pickups use two coils instead of one. Each coil is wound reverse to one another to cancel the interference, which, due to the opposing polarity in the other pickup, is 180 degrees out of phase. There will also be an increase in volume because of the dual coils, which is why humbucking pickups have a ‘hotter’ signal output. 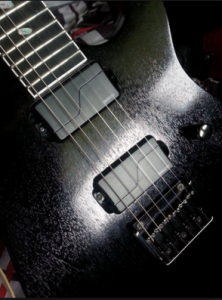 Consistently, it seems, we get the question, “Active or Passive Pickups”?  Ah Yes, the age-old question.  The original pickup design that involves thousands of winds of wire and produces tones from blues to rock, is the passive. There is, however, a newer breed of players embracing active technology, and I don’t mean just metal players at all!  With offering from Fishman, EMG, Seymour Duncan and others, the active market has exploded, providing many tone-shaping possibilities previously unavailable!

Active pickups – What to know:

To start explaining the benefits of active pickups, we must first explain how actives work. Output of active pickups is actually very low initially, but since they rely on a preamp to boost the signal, the output actually can be quite high.  Magnetic fields surrounding a passive pickup are very high, resulting in magnetic string pull that can affect sustain and tone, sometimes negatively.  Active pickups however, are designed with weaker magnets, allowing more sustain by letting the string vibrate with minimal magnetic resistance.  Active pickups convert to a balanced signal, which tends to kill the hum and interference often found with actives.  This makes actives exceptionally good for situations where low-noise is preferable, such as studio tracking.

Low impedance is another pro with active pickups, as often times passive pickups will have potentiometers up to 500k and certain actives allow for low as 25k.  This becomes exceedingly apparent during volume roll off.  Ever noticed how rolling off the volume changes the tone through the amp?  The lower the pot value, the lower the impedance.  This means, that your tone will remain the same at any volume, essentially ”preserving” the tone.  When you think “Active Pickups”, think flat, clean signal.

The snap and increased sustain that comes from active pickups as well as increased headroom is perfect for heavy-handed players.  Given the wider frequency response, it’s no wonder active pickups are perfect for metal guitarists.  Wider frequency response, flat signal, low noise and increased output create the perfect platform to push insane distortion.  Lower tones and high speed shredding will remain articulate with a sharp attack as opposed to muddiness and delayed tracking that can get lost when it comes to traditional passive magnets. 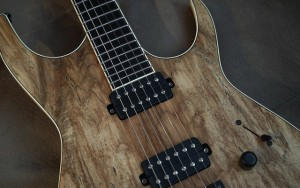 At the end of the day, it is the player’s choice as to what pickups to use.  The unfounded hatred of the new-wave of metal players onto is simply the latest bandwagon.  Do you want a pickup to color your tone and send it to the amp or a pickup to perfectly track your playing without much color and then allow tonal shaping?  The beauty of the answer?  There is no wrong one.  Tune in next time to check out our introduction to passive pickups!

Passive Pickups – What to know

Passive pickups, as stated above, have a higher magnetic field, resulting in magnetic string pull that can affect sustain and tone.  Passive controls can only cut out signal, not boost it, like is possible using the “preamp” on actives.  When the potentiometer has been turned fully you have achieved the maximum output for that particular tonal range.  By turning the pot back you can cut the tone back.  The limitation is you can’t boost it beyond what the fixed characteristics of the pickups and circuity will allow.  This is one reason you see many metal players that prefer no tone knob on their guitar, as essentially, the only thing a tone pot is doing on a passive system, is “Muddying” the output.  Winding of the wire around the magnet of a passive pickup is what effects the magnetic field that absorbs the string’s vibrations.  Ever heard the term “Overwound”?  More wraps of wire, the “hotter” the output will be from a passive pickup.  The location of the magnet in proximity to the strings causes the strings to magnetize, and become magnets, too. When the strings move, they disturb the magnetic field, causing a current to pass through the copper wire.  Because of this, the magnetic field can actually REDUCE sustain of the string because the magnet can effect the string’s natural vibration, as well as cause unwanted feedback.

At the end of the day, some people might describe active pickups as lifeless or sterile.  This is not necessarily accurate, it simply means that they prefer the passive tone.  The passive tone, often times, creates a unique voice, allowing more nuance.  Which you choose?  Is entirely up to you, but in this day and age, players are presented with many more options, and, as usual, we recommend trying as many as you can!

We actually wrote an entire article covering the popular opinion surrounding EMGs, as well as many other articles that cover many topics including pickups!