The Paul Reed Smith Custom 24, or PRS CU24 for short, is a guitar now widely seen as a modern day classic next to the Gibson Les Paul and Fender Stratocaster.  The CU24 is known for helping guitarists obtain tones halfway between a Les Paul and a Strat, and it delivers just that and more.  They have been used by a wide variety of artists playing in almost any genre you can think of for good reason!

I picked this guitar up off a friend of mine locally.  Unfortunately for my wallet, I couldn’t resist forking over cash when he offered it to me in person.  The unique color and rosewood neck simply made it too irresistible…

The full specs of this guitar are as follows:

While I love mahogany necks, I’m a bigger fan of rosewood necks like the one found on this CU24 as I like the way it augments the tone and feel of the guitar.  Typically I find rosewood necks give the guitar taut, almost piano-like lows, and more attack; many luthiers attribute this to the hardness of rosewood.  Ignoring the tonal benefits, a rosewood neck also feels great.  The natural neck is very fast to play on, and isn’t sticky like a gloss neck.

Overall, this guitar sounds stellar tonally, and is capable of playing a variety of genres.  I wouldn’t pigeonhole it by saying it can only do X, Y or Z, as it really is a bit of a jack of all trades.

PRS might be widely compared to Gibson tonally, but boy do they slaughter Gibson in terms of quality control!

I’ve owned around 10 USA made PRS now, and haven’t really encountered any issues with them.  Some of these models were 10+ years old and they didn’t show any unusual deterioration or fading.

The nuts have always been installed well and fretwork has been good too.  Additionally there isn’t any excess glue around the neck or excessive amounts of filler used for the inlay work.

Fretwork is also clean, with no tangs sticking out anywhere, or improperly crowned frets.

Are the USA core line PRS as well made as something like Huber, Ruokangas, Ritter or another builder charging $6500+ a pop?

No, which is fine because PRS isn’t charging anywhere near that for a core line USA made CU24…

Are they much better than most other USA made guitars, including most custom manufacturers I’ve tried?  Yes.

More importantly, PRS is consistent too, which is very important to note because it means you’re relatively safe if you decide to purchase a CU24 blind online from a dealer or in the used market.

If you’re looking for a jack of all trades six string that you know will arrive free of any aesthetic or functional issues that can do just about any genre you can think of convincingly, then buying a CU24 is a good idea.  It will outperform most other production guitars and custom guitars made in the same price range.

If you’re looking for a more specialized instrument to do one genre specifically, then swapping the pickups is probably a good idea, although the stock PRS pickups are very good.

The one issue I personally have with the Custom 24 is the fingerboard radius.  While it isn’t overly round, it is a little rounder than what I usually opt for.  This isn’t a deal breaker by any means, and most guitarists probably wouldn’t notice it.

A feature I would love to see implemented on these guitars are stainless steel frets.  Some people argue that stainless frets make guitars sound too bright, but I personally haven’t noticed a huge difference.  That being said, it isn’t a huge deal to me as PRS doesn’t use an overly soft material for their frets anyways.  Even on my 10+ year old CU24s, the frets have been in good condition.

Do you want a PRS?  Check out our current inventory of PRS by clicking here!

Just because we all love pictures, here are a few shots of the CU24 with a rosewood neck that was used for this interview… 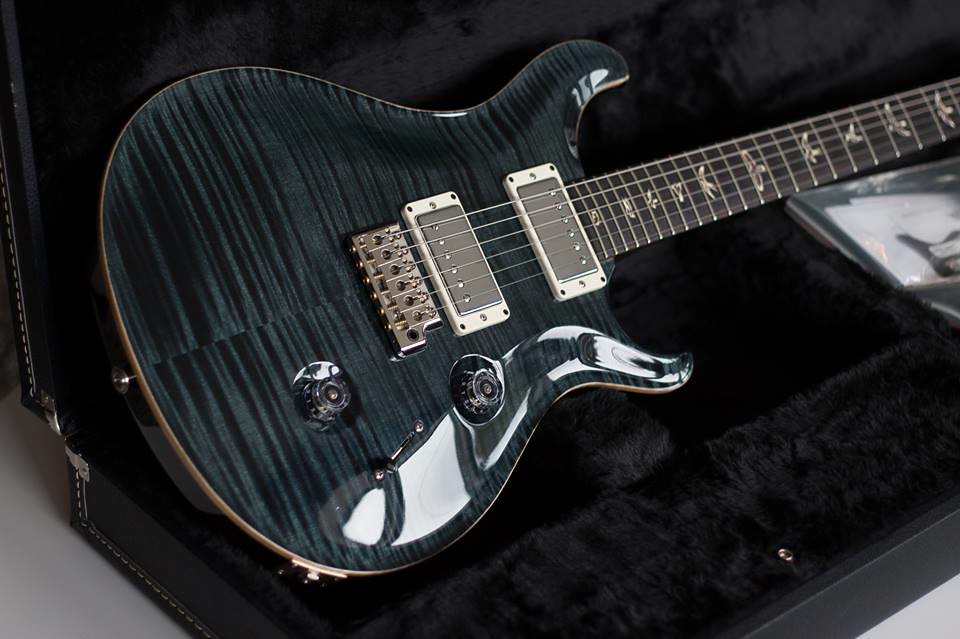