The Ibanez Jem & UV are iconic guitars that spawned a slew of copycats, and put Ibanez on the map in a big way!

Below is our full guide to all Ibanez Jem models.  It is a work in progress, so feel free to email us if you have any suggestions.

These three were some of the first Jems made.  The specs across all three models are essentially the same.  Some of the original three Jems shipped with a special palm rest, but this was quickly discontinued due to patent issues.

Jem 777LNG:  This is the most rare of the original Jem models as each one was signed and “doodled” on by Steve Vai.  They are also hand numbered by Vai, the number corresponds to a special decal found on the hardcase.  All 777LNGs with serial numbers 4 through 777 were signed using a Jumbo brand marker, with 1, 2, and 3 being signed using a Sharpie.  Due to the special hardcase these came with and the signatures/numbering/doodling by Vai, the LNG is the most valuable of the original three Jems and was only make in 1987.

Exactly 777 of these guitars were made total.  #0 also exists and is owned by Steve Vai, it is equipped with a Kahler.  Worth noting is that famous blues guitarist John Mayer commissioned a copy of the LNG by the Ibanez Los Angeles Custom Shop.  There is an “LNG  Tracker” that is regularly updated as of 2016. http://greenjem.com/registry.htm

High res pictures of the LNG are available below, click on the right hand side of the picture to scroll through the gallery: 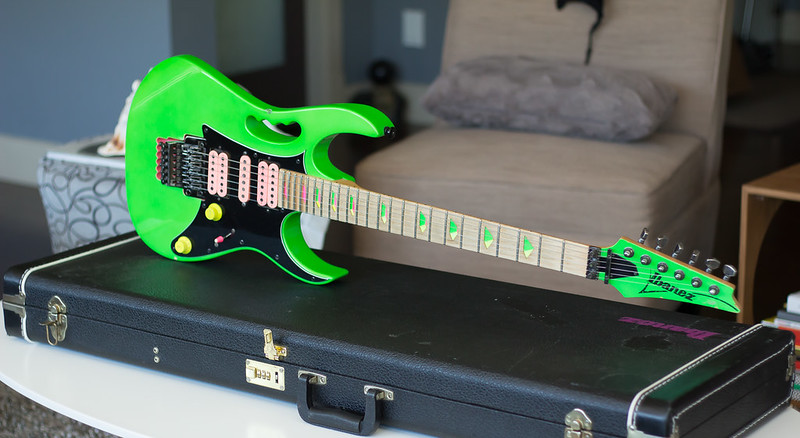 Jem 777DY:  The 777DY is an LNG in Ibanez’s Desert Yellow finish, hence the DY name.  These are the most common of the classic three Jem models, and usually the cheapest to buy used.  The DY was the longest running of the original three Jems, and was in production from 1987 to 1996.

Jem 777SK:  SK stands for Shocking Pink, and these were originally very shockingly pink.  However, a lot of the original SKs have faded to a gross salmon pink.  This is a hard Jem to find in good condition because the tendency it has to fade.  The good news is that if yours hasn’t faded by now it is unlikely to fade any further if at all!  The pink looks incredibly vibrant in person.  Due to the problems with fading, this model had a small three run and was manufactured from 1987 to 1990.

Ok, so maybe “new” isn’t the right word to use here.  The VDY, VSK, and VBK were released during the original production run of the some of the classic three Jem models.  They features the same specs, except they had vine inlays (hence the V in the model name), and rosewood fretboards.

Jem 777VDY:  This model featured a thinner Wizard neck than the original DY, and was made from 87 till 89.  The model is harder to find than the regular DY, but they still seem to pop up.

Jem 777VSK:  This is one of the rarest Jems.  Some estimate that only around 30 or so were made!  They were only manufactured in 1989.  If you see one, buy it because there’s a chance you won’t see one ever again.

Jem 777VBK:  The VBK is unique because it dumped the flashy neon Vai aesthetic for plain black.  These guitars had a black finish with a green inlay.  They look great, and are plentiful because they were made from 1988 to 1992. 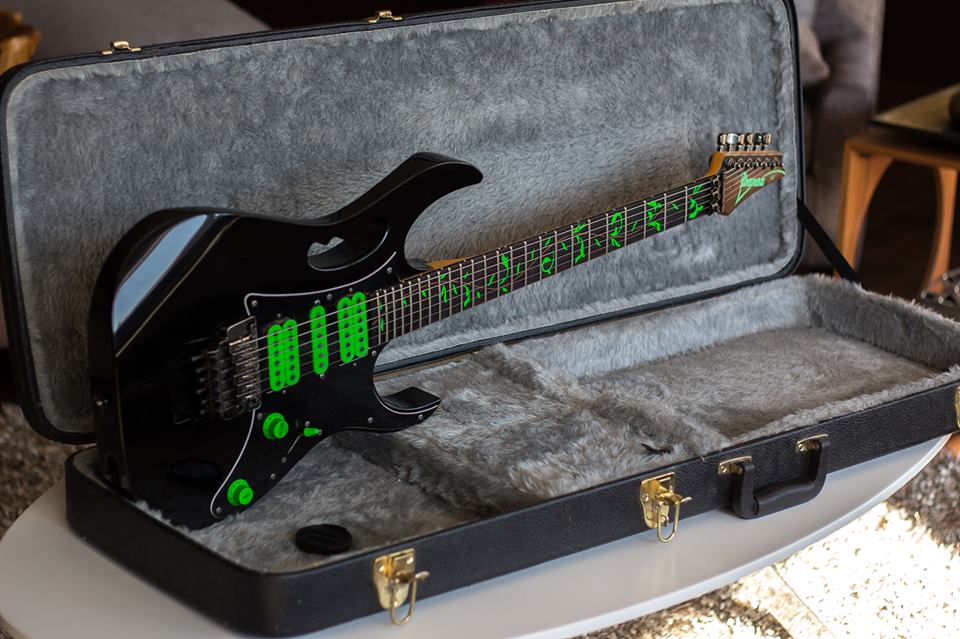 These were the “second generation” of Jem models.  The specs are largely similar to the original 777 series, but the aesthetics vary quite a bit, and the newer ones use different pickups.

Jem 77FP:  This is the second longest running Jem model made.  They are the most affordable way to try a “vintage” Jem out.  They were made from 1988 until 2004 in the US, but continued production for other countries.  They feature a special floral print 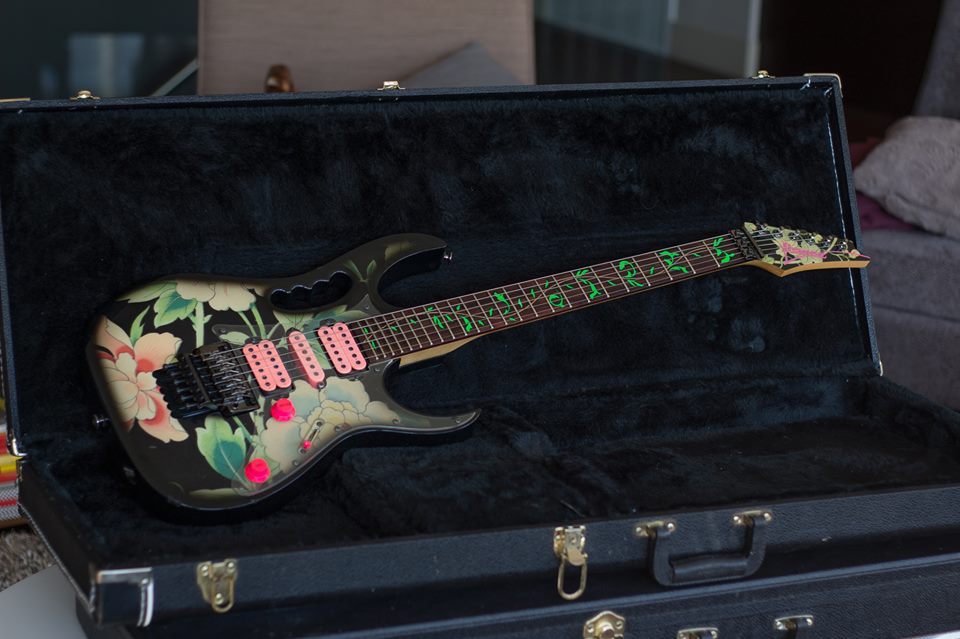 Jem 77BFP:  Like the FP, but with a blue floral print.  The print is known to fade to an aqua/greenish color, which in my opinion looks fantastic!

Jem 77GMC:  The GMC (green-multi-color) is one of the rarest Jems around, and features a unique green and black swirl finish.  These guitars also have matching green and black pickups, plus green knobs and a green switchtip.  The inlay is a green vine.  Just like the DNA models, these swirls were done by About Time Designs (now defunct).

Jem 77PMC:  The PMC (purple-multi-color) is the purplicious cousin of the Jem 77GMC.  These are also quite rare to find in good condition as they are prone to fading.  The inlay on the PMC is a disappearing instead of the vine found on the GMC.  271 Jem 77PMCs exist, making these very difficult to find, and expensive when they do pop up.

Jem 77V/Jem 77VBK:  This guitar is pretty boring as far as Jems go.  They have an abalone/mother of pearl vine inlay, pearloid binding, and DiMarzio breeds.  They aren’t particularly hard to find or all that rare.

Jem 77FP2: These are like the original FP but with a new fabric print.  They can be found relatively cheap as they are new.

JEM7BSB:  The BSB sports a blue finish that has been burnt.  They started being made in 1996 and were manufactured for three years total.  Some of them look more aqua/teal than they do blue as they faded over time.  These guitars also feature special fretboard markers, they are visible in the picture below. 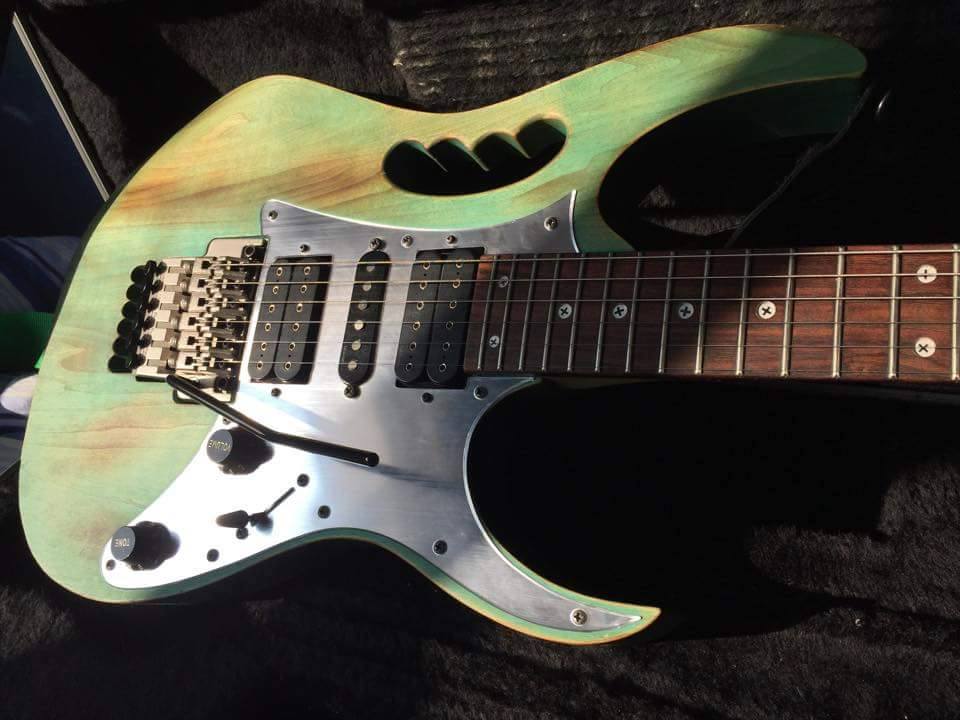 JEM7DBK:  Finished in a textured black.  Kind of what you’d expect a guitar to look like if you used Rhino Liner on one.

JEM7PBK: These have a different rounded handle instead of the normal monkey grip.  They also feature pyramid inlays.  They are relatively tame for a Jem.

JEM7RB:  The BSBs cousin, except with a special round handle.  These are dark brown/rootbeer finished and burnt. 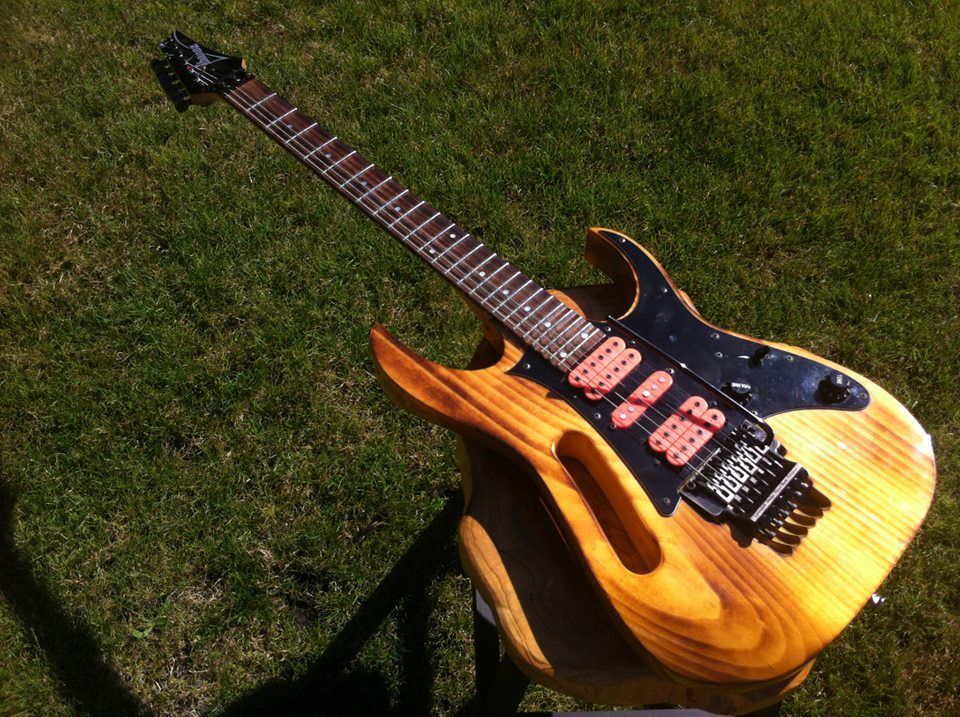 JEM7VSBL:  These feature a blue vine and blue finish with a white pickguard.

JEM7VWH:  By far the most common Jem.  Some were made with ebony boards and others feature rosewood fretboards.  These are one of the most copied guitars around, and expect to run into fakes if you’re looking for one.  Be careful if you’re buying one!

These guitars were made to commemorate milestones for Ibanez.  Each one has a very unique finish, and they are all relatively rare.

Jem 10th:  Just like the name implies, these were made to commemorate the 10th anniversary of the Jem.  They were made & sold from 1996 to 1997.  They come with a special letter signed by Vai.  Worth noting is that Ibanez said 852 were made…but higher serial numbers exist.  This is likely due error with the serial numbers.

These models feature an engraved aluminum pickguard and special headstock overlay.  Guitars sold in the US came with a silver hardcase and an outside plaque, plus silk screened cover.

Jem 90th HAM:  No, HAM does not stand for what you’re thinking it stands for.  It actually stands for Hoshino Anniversary Model!  The Jem, along with Petrucci and Satriani signature models had HAM editions.

The 90th HAM Jem featured specs that were similar to the 10th, but with a unique blueish finish that looks almost like ice.  The model must be seen in person to be fully appreciated.

831 of these guitars were built, with 72 brought to the United States.

JEM2kDNA:  This is my personal favorite of the anniversary series of Jems.  This was released in the year 2000, just as the name implies.  Each guitar was individually swirled by Darren Johansen of About Time Designs.

Want to know why these models have the letters D-N-A in their model name?  It’s because each guitar has some of Steve Vai’s blood in it.  It wasn’t a little bit of blood either!  According to Darren Johansen the ratio of blood red paint was mixed at an 8:1 ratio.

These guitars came with a “body bag”, which was a black bag that slips over the guitar, and a special hardshell case.  300 of these guitars were made by Ibanez for distribution worldwide.

Jem 20th:  Made in 2007, these are clear and made of acrylic.  They have a special lighting system inside composed of green LEDs.  When you pull the tone knob, they all light up.  The problem with these is that once those LEDs die, you can’t exactly open the guitar up and replace them.

A few Jems were reissued, except made in Indonesia with mixed results.  Other than looking roughly the same, these reissues are in no way comparable to the Japanese made Jems.  Please note, you can buy a Japanese crafted Prestige for only a little more than a Premium, and we recommend doing so instead of buying the Indonesian produced reissues.