What’s Jeff Loomis’ guitar gear like? Jeff Loomis is one of this generation’s defining shred gods. Players frequently try to emulate both his tone and playing. We can get you halfway there (or maybe all the way if you check out Cannon’s awesome lesson videos)!

Jeff has played on many albums, and gone through many different iterations of his tone, so we’re going to focus on his current rig used in Arch Enemy and Conquering Dystopia! Let’s check out the Jeff Loomis guitar rig!

Jeff  uses his signature JLX and JL axes from Schecter. Both are available in 6 or 7 stringed models. The guitars are outfitted with his new signature active pickups from Seymour Duncan to fulfill his demand for tight riffs and super bright solos. Before moving to Duncan, he had used EMGs. He also had other Schecter signature models, such as a V shape!

As I said, there have been many Jeff Loomis Schecter guitars, but a common thread throughout most of them have been maple fretboards and swamp ash bodies. He obviously favors Floyd Roses as well, his recent Cygnus model using the 1500 which has some additional stainless parts for durability and stability.

Jeff uses a Kemper Profiler live for his work with Arch Enemy. His Rhythm Channel is based off of an older 5150 patch he had developed with his longtime friend and bandmate in Conquering Dystopia, Keith Merrow. His Solo channel is also an older 5150 patch but with an added reverb and delay in the Kemper’s effects loop. The clean patch he uses is closely based to the “Strummer” patch on the Kemper Profiler. He uses it directly out to the front of house! 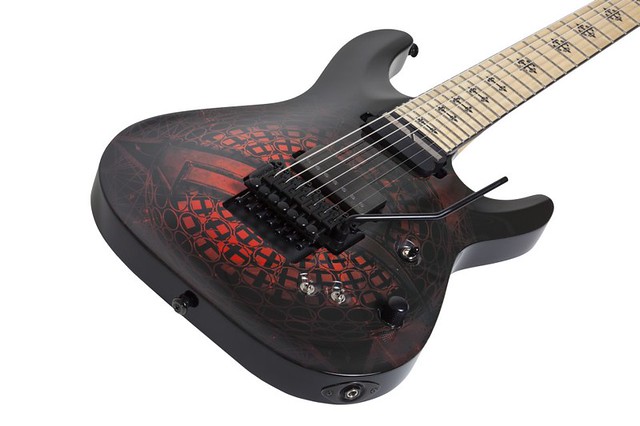 Simple rig, awesome tone! Jeff is obviously a player that focuses more on playing than gear, as well as gear and tone that’s straight to the point. You can check out a cool video on the ethos behind his new Seymour Duncan Jeff Loomis Blackouts here!

If you want any of his signature Schecter models, we are authorized dealers and can get you a great deal on one here! Or check out more of our articles!