We all know and love PRS. Even beginner players are familiar with the iconic look and tone of a Paul Reed Smith. However, there are a lot more choices beneath the surface. It can be very overwhelming… Sounds like a PRS guitar guide could be useful.

So that’s exactly what we did! This is going to be a guide to all of the current major PRS guitar models. All in a way that doesn’t talk down to you: we know what you’re about, and we get straight to the point!

This will omit basses and full hollow-bodies for the sake of simplicity. The S2 series, which is excellent by the way, is also absent – but you can read more about the PRS S2 in our reviews! Obviously we can’t cover all the Private Stocks either, but we’ve done an overview of the PRS “Birds of a Feather” before as well. 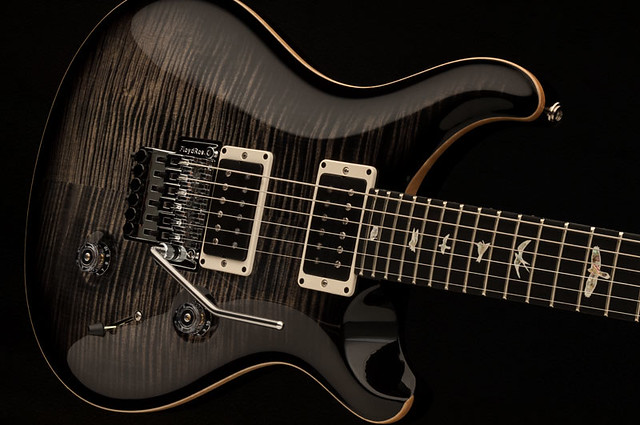 These are the archetypal PRS models. Known for their elegant carves, well balanced 25” scale length, and birds, these guitars are well suited for most players. You can see them being played and equally at home in both Taylor Swift’s backing band and progressive metal acts like I built the sky.

Rich mahogany tone, easy playability, and killer proprietary hardware and pickups are the hallmarks of PRS guitars. The CU22 can be considered a bit more vintage, due to their neck joint and neck pickup placement, and the CU24 is also available in a Floyd Rose variety, favored by players such as Dustie Waring (Between the Buried and Me).

Check out a CU24 review to learn even more about the legendary model! 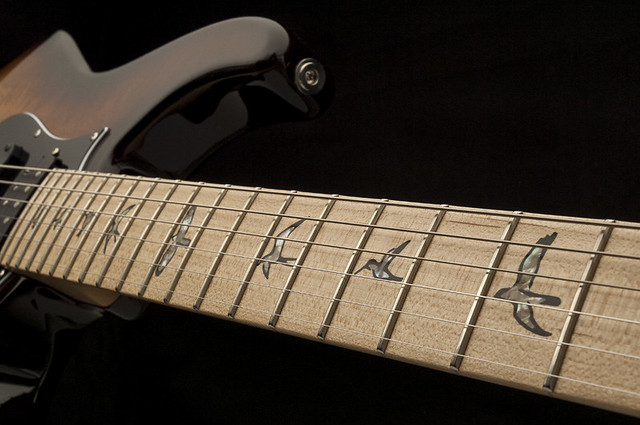 To put it simply: the CE24 is a CU24 with bolt-on maple necks! This is awesome for punch and clarity, and are some of my favorite models of all time! It also happens that it’s easier and more inexpensive to produce bolt-on guitars, so some other features (like recessed knobs on the carve top, and older ones didn’t even have bird inlays) were removed and these come in at a much lower pricepoint.

I love these for metal, and I normally set them up in Drop C. I included the Brent Mason signature model because the CE22 is currently out of production, but his is based on it. It’s an HSH CE22 with a slightly longer 25.25” scale. This makes the guitar really versatile and musical overall, especially considering the optimal neck pickup placement. It even has a maple fretboard, which is something you don’t usually see on Paul Reed Smith guitars.

I actually reviewed a CE24, so if you want an idea of how they play & sound, then give that review a go. 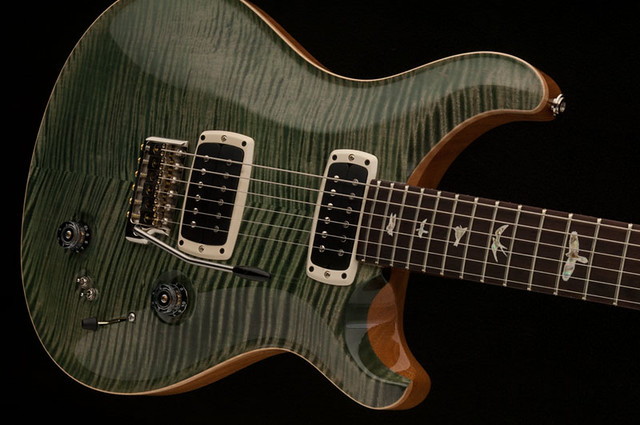 Speaking of versatility, this is where the 408 and 503 come in! These can be thought of as two sides of the same coin, as both were designed to deliver a wide array of tones. 408 stands for 4 pickups 8 sounds and the 513 for 5 pickups 13 sounds.

To break that down even more, the 408 pickups are designed to sound like a blend between covered and uncovered humbuckers, and have the single coil tones not experience great volume loss, and sound powerful, sort of like a lipstick tube pickup. The 513 is basically tapping and splitting combined. (More on that in the most important article I will ever write)

The 408 can largely be thought of as a little more modern due to its choice of neck profiles, and the 513 as a bit more vintage for including a single and having a thicker neck, but the short version is that they’re both very versatile! It’s worth noting that because tone was the utmost priority when designing these, both have 22 frets. 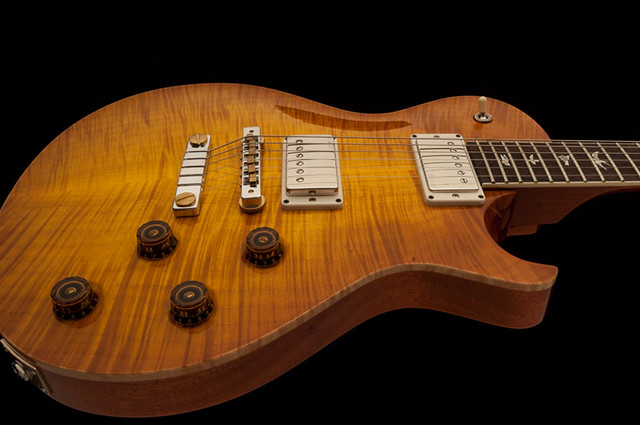 The SC245 can basically be thought of as the PRS ethos applied to a Les Paul. PRS’ trademark odd scale length for better tension and tone is applied here, as it has an even shorter than Gibson scale length, at 24.5”. It also features an awesome 2-piece stoptail design for vintage tone, a 4 knob layout, and of course, the birds and awesome top carve.

Overall it’s a wonderful vintage instrument that appeals both to traditionalists and people who appreciate design improvements alike. 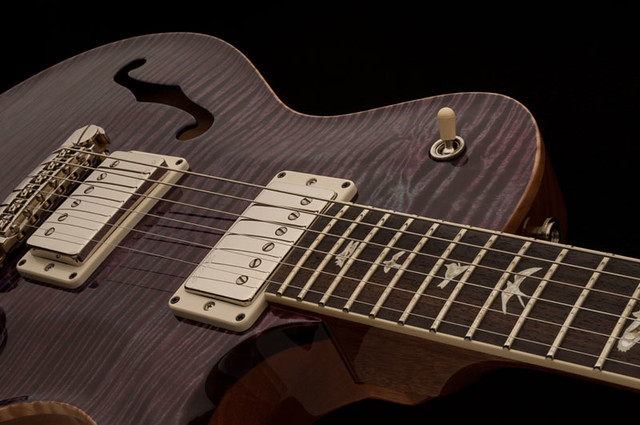 Now seemed like a good time to talk about these, because it’s going to be very easy!

P stands for Piezo… these are Piezo versions of the models I’ve talked about already (with some minor changes)! The Piezos are made by LR Baggs, are installed in a two output jack format, and are integrated into the PRS trems (or in the case of the 245s, the stoptails).

My favorite out of all of these by far is the P245 Semi-Hollow. The Piezo works in tandem with the semi-hollow construction so well, and the guitar just feels alive and resonant. I can’t properly express how beautiful the tones from this are. 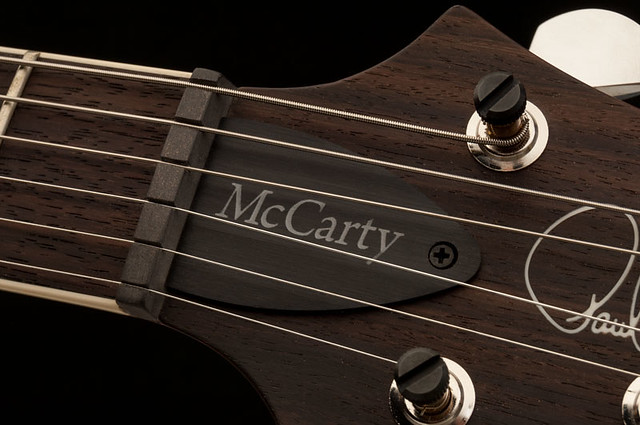 Ted McCarty was the president of Gibson for over 15 years, and he actually became friends with Paul Reed Smith and helped design some PRS guitars in the late ‘80s. The McCarty is the result of that!

It features a thicker back for more sustain, as well as neck binding, which is a nice aesthetic touch.

The new McCarty 594 can be thought of as an extra-special super-vintage take on the McCarty. It has a 2-piece bridge, a 24.594” scale, finely tuned extra low output pickups for warmth and clarity, and other adjustments.

Both these guitars are beautiful and great options for players looking for a beefy guitar that retains the PRS aesthetic, but gets you more into the Gibson side of things. 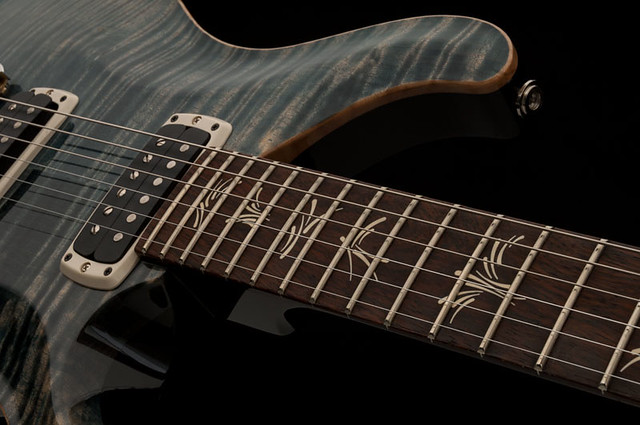 Paul’s Guitar is the full PRS experience, and is specifically designed by its namesake as a guitar that is the absolute best of what PRS has to offer. It has the same pickups and switching system as the 408 (it’s something Paul is really proud of) for utmost versatility, as well as brushstroke bird inlays! 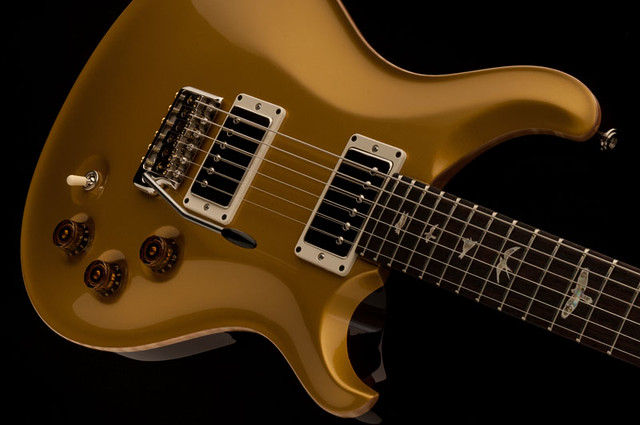 Here we get to the signature models. We’re mostly getting into new shapes here, but there are a lot of small changes that make for pretty different guitars!

The DGT is based on a McCarty (but with an even thicker neck). David Grissom is one of the most prolific session players of all time, so he worked with PRS to design a guitar that can cover a lot of tonal ground .This includes specialized pickups and electronics, as well as tall frets for easy bending and the PRS tremolo. (The “T” in DGT)  The DGT is one of the most popular PRS models and is heavily favored on forums like The Gear Page.

Carlos Santana is arguably the most famous PRS artist, and has had a lengthy relationship with the company. This really is a stripped down rock machine. One volume, one tone, a 3-way, 24 frets, short (24.5”) scale, and Santana’s custom pickups. It also features a beautifully inlaid eagle on the headstock.

Mark Tremonti’s guitar is obviously well suited for rock and metal. It’s based on the SC245, but has the full traditional PRS scale length, as well as custom pickups voiced to his needs! Most notably, the guitars with a tremolo are routed so that you can also pull up! I really enjoy these whenever I play them, and they always seem to get great tops.

I hope you learned a little reading this guide! PRS has a lot of choices so it’s good to be as informed as possible.

As I touched on earlier, the S2 models are also very cool and unique, and Private Stock instruments are always remarkable. Keep in mind many models have come and gone from the PRS lineup (the CEs for example were only brought back just this year!) so you will run into even more variations out in the wild. Especially considering that sometimes specs will vary due to artist packages.

We upload new articles daily so if you liked this one, make sure to check out some more! We are also authorized PRS dealers and can help you pick the best Paul Reed Smith for your needs.

This article was written by Kyle Karich, our editor located in Florida.