Welcome back to another article of Wired Theory! This week we’re going to dive in and decrypt key signatures together.

This is the first step to your total mastery of music!

Why do The Lord of the Rings soundtracks sound so epic? Why does the music in Titanic evoke a somber tone? Why does John Cena’s theme song make you feel like a badass?

Composers tend to write music based in key signatures, which are a combination of accidentals, written to identify the “key” of the piece. Key signatures tell you what notes you’ll be playing to fit the harmonic structure of the piece.

Key signatures are often chosen based on an instrument’s comfortable range, or to set a certain mood or atmosphere.

A lot of metalcore music from the early 2000s was written in C-minor, which is a dark and heavy key.

80’s hair metal was generally in major keys, which evoke those feelings of happiness or being awesome.

Now, just because you have a certain key signature does not mean you cannot leave it or play “outside-the-box”. Almost all classical music and a lot of progressive rock changes keys. Not to mention all of the jazz greats played solos and heads that included many notes that did not seem to fit in the key of the song.

In order to show these changes, you can either change the key signature, or for temporarily alterations you can add an accidental.

Accidentals are note that are not members of the scale or mode indicated by the most recent key signature. It’s a temporary alteration by a half step up or down. Composers indicate these by using sharps (♯) to go up a half-step, flats (♭) to go down a half-step, and naturals (♮) which cancels a previous accidental.

Let’s see this order in action. Key signatures are a very interesting topic because all 12 are all related. We use the Circle of Fifths to express the relationship among the 12 key signatures, and the associated major and minor keys. 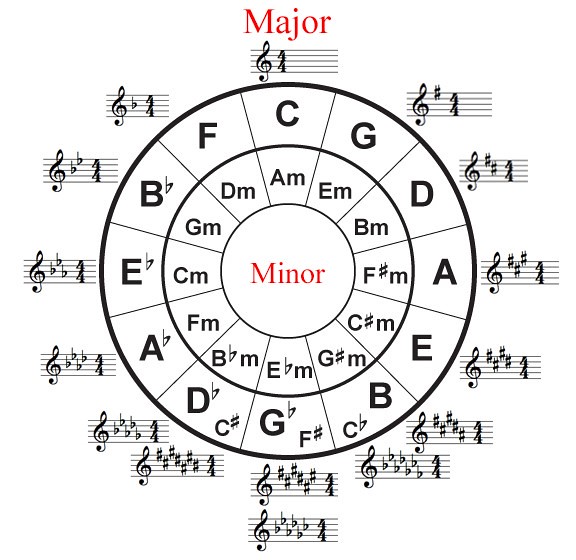 This awesome circle shows the 12 keys, the corresponding accidentals in the key, and the major and minor scales that fit the key. As we discussed in our first article, the keys below also have enharmonic names as well.

This comes in handy for handling modulations and songwriting. A ton of jazz progressions move in fifths.

Let’s see this all in action.

A great example of key signatures, accidentals and modulation is in Alice Cooper’s “Poison”.

The guitars and keys seem to change keys during the pre-chorus. Additionally, the intro starts on a D-Major chord, which does not fit the written key of G Minor, hence the accidentals.

The music below shows the modulation during the pre-chorus: 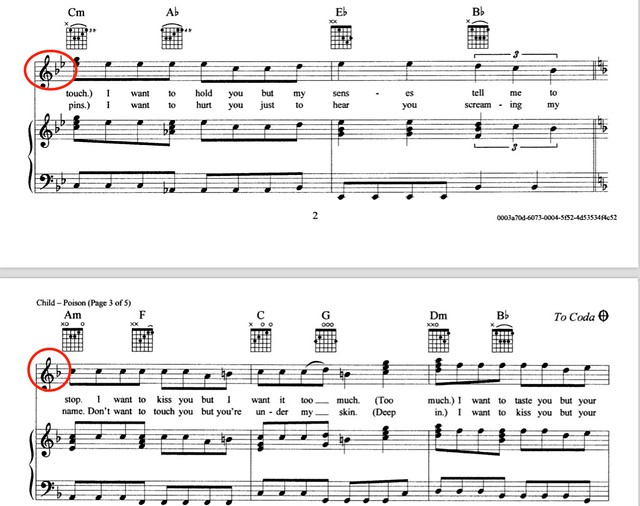 This song modulates using the circle of fifths by moving from the key of Gm to Dm.

A modulation is the changing from one key to another.

As mentioned above, the Circle of Fifths ascends in “fifth” intervals.

Also, when the piece modulates from Gm up to Dm, there is one less flat, as seen in the circle.

The modulation seems so smooth because of that change up a fifth: it’s a smooth interval. It’s a historically proven and scientifically backed component of music theory.

Next week we’ll talk intervals. These are the building blocks when it comes to scales and chords, which music is based off of. Watch out for Cannon McDonald’s video this week, and stay tuned for more exciting content.