Welcome back to Wired Theory, a weekly series by Wired Guitarist. I’m glad you all have been enjoying the past couple articles. This week we’re going to start diving into how notes work together.

I’m talking about intervals. Not the awesome music project headed by Aaron Marshall, but rather the space between pitches. There are many types of intervals, and we will get to those as we go on.

As a disclaimer, we are referring to the Western music theory ideology where the smallest interval we have is a semitone or half-step. No microtones will be discussed here

Before we can start building chords, scales and writing songs, it’s always a great idea to learn how all of these are related. We’ll learn how to build chords and how notes work to harmonize each other.

Let’s refresh on note names; you have 7 notes in the musical alphabet:

As well as your 5 sharps and flats:

This gives us 12 total notes.

These names describe not only the difference in semitones between the upper and lower notes, but also how the interval is spelled.

What do the 5 qualities tell us? They help us to identify the number of semitones in each interval along with the number, and they follow a pattern:

Since there are 7 different letters in the alphabet, we use numbers 2-7, (with 1 being the unison), to stand for the 7 possible notes.

As for the other intervals, they are used for enharmonic intervals and notes spanning the same number of semitones but a different number of spaces on the staff.

Seem confusing? Don’t fret, here’s a chart to help you out: 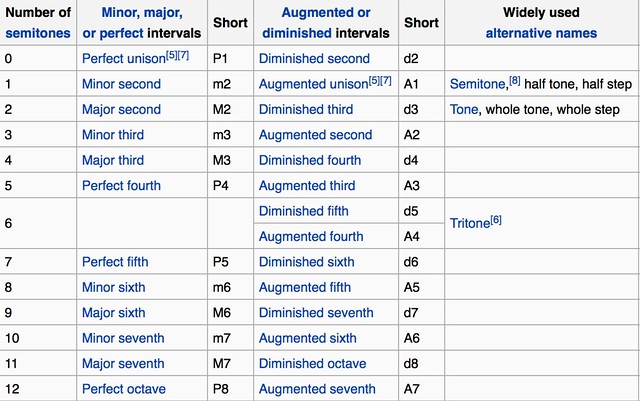 As you can see, depending on the actual notes and spaces on the staff, an interval can have a different name even though it sounds the same aurally.

You notice how there is a space where 6 semitones are in the chart?

Well, when you approach two notes 6 semitones apart (lets say C and F# or C and Gb), you reach a tritone. Why is it isolated from the others? Well, historically speaking, it’s neither a major nor minor interval, and can only be described as a diminished fifth or augmented fourth. The common term is tritone, and you won’t hear these as often, because they were associated with the devil back in the early days of contrapuntal music.

Pretty metal, huh? Well, the first time the tritone was used in popular music was in Black Sabbath’s “Black Sabbath”, which further associated metal with the occult.

As for incorporating intervals into your music, check out Cannon McDonald’s upcoming video and get ready to shred. Stayed tuned next week for when we’ll start learning how to use scales and modes properly with our new knowledge of intervals!