Just about every guitarist I’ve met has owned an Ibanez at some point, even most beginner guitarists have had the opportunity to play on an RG. Ibanez makes everything from quality workhorses to obscenely high end works of arts, so we made this Ibanez guide to help you understand their current offerings a little better!

I did leave out the basses, most of the artist models… Let’s face it, I don’t feel like writing an encyclopedia (maybe we should do that later…), and you don’t have the time to read it! I think this will be much easier to digest!

So here is the Wired Guitarist (compressed) Ibanez guide! 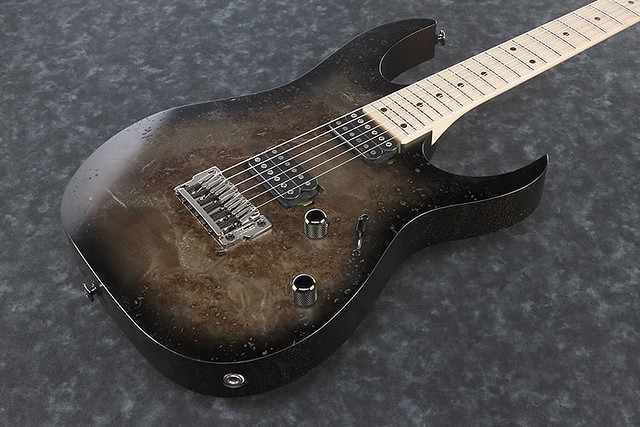 One of the most recognizable Ibanez guitars is the RG, which is known for it’s fast and thin neck. It has become one of the staples of rock and metal music in the last thirty years. The RG comes in many different styles; hard-tail, tremolo, and anywhere between six and nine strings! There’s definitely something for everyone in the RG line.

After the RGA released in 2005, it became a hallmark of modern metal. The aggressive sound, playability, and well-executed simplicity earned their spot as one of the most sought-after guitars around. These guitars are often seen in the hands of players such as JB Brubaker (August Burns Red) and Misha Mansoor (Periphery). You can read more about this instrument in our article dedicated to the history of the RGA.

If tuning down to Drop Z is your thing, look no further. With a 26.5” scale for improved stability when down tuning and aggressive contours for easy fret access, the RGD is a metal machine built for the modern player in mind. The RGD7UC Prestige even comes pre-loaded with BKP Aftermaths, which is something you usually only see stock on a custom-shop guitar. These are favored by many modern players such as Tim Henson and Scott LePage (Polyphia). If you care to learn more, we have a detailed review of the RGDIX7MPB. 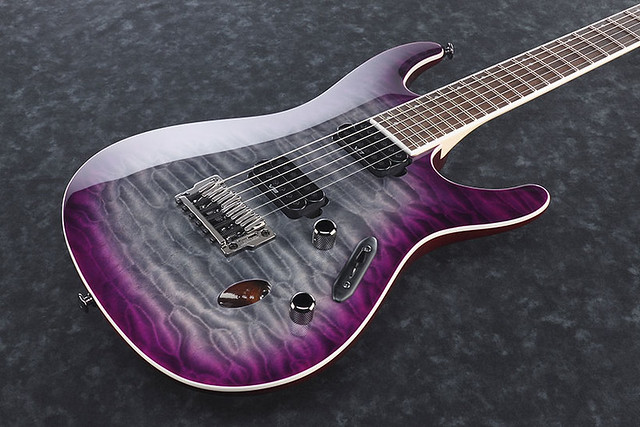 The Ibanez Saber series was introduced in the late 80’s, along with the RG as a sleeker option for guitarists. It had a heavily contoured body and ultra-thin Wizard maple neck (the thinnest on the market at the time).

This guitar is ridiculously thin, but still manages to resonate like any other guitar twice its weight due to the mahogany body and tight neck joint.

These are starting to gain more popularity in the metal community and can be seen played by guitarists such as Jesse Cash (Erra).

To put it simply: the SA is basically an S, except it has a flat back rather than a carved one (making it a little thicker) and has a single-locking tremolo! With its versatile HSS configuration, this guitar practically excels in any genre, and is more friendly to traditional players.

If you’re still a bit confused, check out our article about the differences between the RG and Saber. 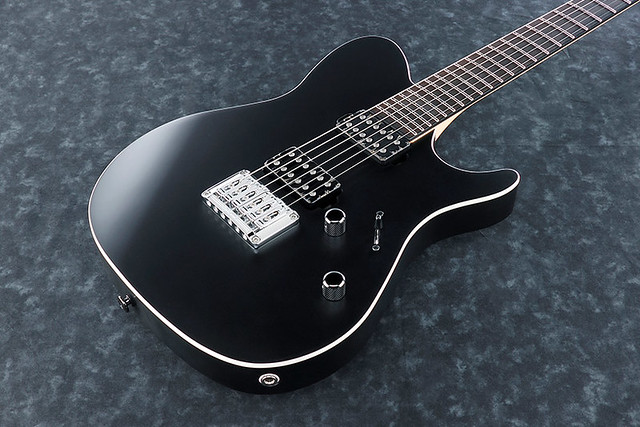 When you take the body of a Tele and the neck of an RG, what do you get? An Ibanez FR is the answer we are looking for. This guitar is a prime example of taking a classic and molding it into something modern.

There are currently two styles of Ibanez FR guitars. With a matte black finish, ebony fretboard, and BKP Aftermath pickups, the Uppercut Prestige model is a metal machine. You can read about that one in our review of the FR6UC.

The standard FR is a little bit more of a classic design with a faded burst finish and an HS pickup configuration. Brent Rambler (August Burns Red, check out our Geared article covering his rig) can be seen using his custom FR models these days.

Stylistically similar to the FR is the Talman. It brings the same classic charm of a Tele that the FR does, but where it brings the look it also brings the classic tone. This one comes in a couple different configurations. It has a very Tele-like SS config as well as a SSS Strat-style setup.

This guitar is for you if you’re looking for a vintage Fender sound with the precision and feel of an Ibanez. The Talman is definitely a fan-favorite. If you are interested in hearing more about this guitar, we have a more in-depth review of the Talman! 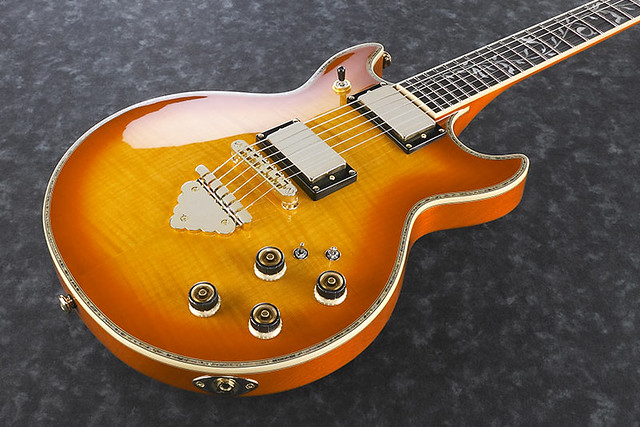 The AR and ARZ series are guitars build for the classic rocker. With the dual humbucker configuration and a chunky neck they bring all of the traditional tones you’d expect out of a Gibson. The AR has a real classy look to it, almost reminiscent of a Rickenbacker, where the ARZ is a single-cut Les Paul style.

If classic rock isn’t your style but you love the single-cut look, there are prestige models of the ARZ that offer some BKPs as well! (This way you can stay classy while melting some faces). There are even inexpensive 7-string models that gained a bit of a cult following just for being so different from the average 7. 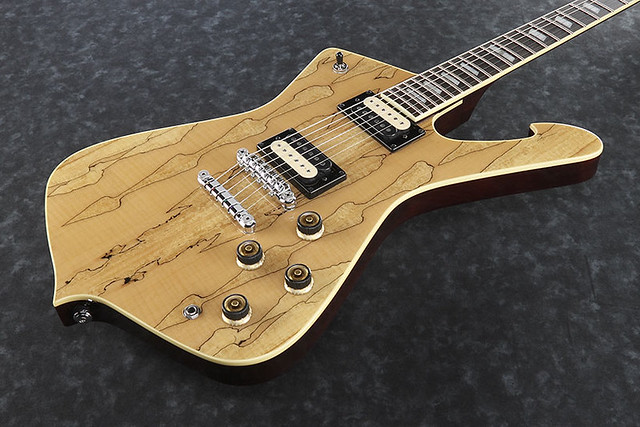 Some of the first Ibanez models to be introduced to the world were the Iceman and the Destroyer. These models are no doubt aimed at the hard rock and heavy metal community. Most of these models come stock with Tone Zone/Air Norton pickups. Now, these pickups tend to have somewhat of a love/hate relationship in the guitar community, but these undoubtedly deliver a thick low end growl that you’d expect out of something as aggressive looking as a Destroyer. We had a chance to review a DT520 model if you want to read more!

Made famous by Paul Stanley (KISS), the Iceman is essentially a Destroyer with a more stylized body. The most notable feature of this guitar is the exaggerated lower horn. 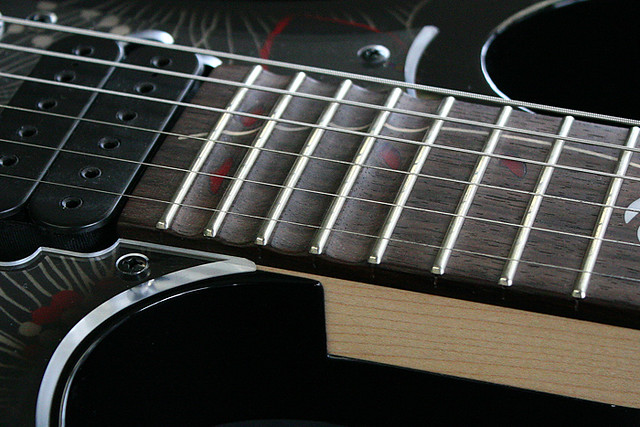 There are so many great artist signature models by Ibanez. I’m just going to touch on a couple of my personal favorites.

The JEM is unmistakable and is arguably one of the most successful signature models of all time. When Ibanez was finding its footing as a company no longer simply producing high quality copies of other companies’ guitars, they were thankful to have Steve Vai come onboard and help direct them towards the designs they’re now well known for. Everything about Ibanez and their iconic RG (the pointy shape, versatile pickup layout, thin necks) was first designed for the JEM.

The JEM’s over the top features such as the Monkey Grip, Lion’s Claw, flashy inlays, and more really differentiate it from both a player’s and collector’s standpoint. Thanks to the Dimarzio Evolution pickups, these incredibly versatile guitars excel at everything from metal to blues and everything in between.

There are so many JEM models that you could write an article just on them.  Oh look, we already did that!

A more recent signature model that stands out is the JBM. Designed for Jake Bowen of Periphery, this guitar takes the RGA to the next level. The most notable features are the moon inlay on the twelfth fret and the Dimarzio Titan pickups. It’s no secret that this guitar was built to excel at extreme metal styles. Aesthetic appointments include natural maple binding and black/gold hybrid hardware. It even has the beloved Lo-Pro Edge tremolo! To answer your question: yes, it djents.

I hope this was informative for you! There are many more models to learn about, and I barely scratched the surface of the ones I did mention. Ibanez is a company that is constantly changing their lineup (such as the revival of the RGA this year).

We’ve also written up a brief article on the history of Ibanez , so you can go learn about some of their older models there!

Luckily, we’re constantly uploading new articles (many of which are more Ibanez reviews), so if you liked this one be sure to check out more!

Also, remember that we are authorized Ibanez dealers, so if you are looking to get your dream Ibanez be sure to check out our store. Don’t be afraid to send us an email if you need help picking out the Ibanez to suit your needs!