In the land of bedroom musicians, drummers can be a hard thing to find, and knowing how to mic a drum set properly can be even more difficult, which is why in this age of vastly improved drum samples and easy to use MIDI programs, it’s become such a great convenience (though sometimes tedious) to just get a VST and click each hit into place.

However, the one problem with such a wonderful convenience is that everyone now has the exact same drum sound and the samples still don’t compare to the real thing that having a real person drumming can add – which is why we need to take some steps to nudge our sound closer to that hard to recreate feel of live drums by doing things such as:

One thing a lot of people forget when starting out is to adjust the rate at which the computer says the drums are being hit. Drummers aren’t always going to hit the kit perfectly with 100% of their force each and every time so one thing you can do to mimic a human is to adjust the volume of some of the hits so that they aren’t perfectly consistent. One spot in specific to pay attention to this is when there are 2 notes in succession; make one of them slightly less powerful to make the section stand out. You can also use this to add in ghost notes and create emphasis and build up in sections where it’s needed. It may take a bit extra time and be tedious, but going into each section and making it slightly different dynamically can add a lot to the overall feel of a song. Don’t put all of your midi notes at 127 velocity please.

2. Time is Only a Theory

Look, I get it, I’m not a big fan of this part either. We spend a ton of time practicing our timing to play perfect to a metronome, but unfortunately that can make regular (non-musician) listeners pick up a ‘sterile’ feeling from songs that are overly perfected. People want a human feel to what they listen to so they can relate which is why sometimes you need to turn off the metronome, go into your midi drum track and throw perfection out by a fraction of a second since imperfection is often that special sauce people add to art. Try adjusting a few drum sections to be off timing in the slightest bit (by slightest I really do mean fractions of a second) and play to the drums when you record your guitar parts and even though it may not feel perfect while you play, it will create a more overall human feel to the recording. Also don’t adjust them all by the exact same amount or we’re basically at square one with everything slightly off.

Reverb, I’ll say it again so we’re clear what this part is about: Reverb. Not much reverb, just a tiny bit. If you want to work towards a better MIDI drum sound, then try adding the smallest touch of reverb to give the impression that it’s in a real room. Try not to make it overly obvious it’s not a real reverb though, find a reverb vst you like (preferably with a wet/dry mix) and bring in the reverb slowly until you can just barely notice it and adjust to personal taste to give the impression that it was recorded in a real room instead of clicked into place in a DAW. On the other hand, a lot of high quality samples these days include a “Room mic” Track, such as Steven Slate and GetGoodDrums.

Many people want that thick thump in the chest kick drum sound, but often times digital drums lack the real bottom end to provide this. I’ve learned 2 simple options to compensate for this lack of bottom end: The first is to copy the drum track and separate the kick (plus anything else you want to get more thump in its rump on). Once you have a copy of the track you want more low end in add an EQ on it and cut everything above 400hz so it’s just a muffled mess. Now play the song and while you listen and bring in the level of this new kick track with everything above 400hz cut out while the original untouched drum track remains at the same level until you find a spot you like.

The second method is essentially the same, but instead of adding an EQ you drop the kick track an octave down. They both get a similar sound, but can have different uses – the EQ method gets a cleaner more refined feel whereas the octave down gives kind of a lo-fi “I recorded this in my garage” feel to the kick. These tricks can also work on toms and snares if you play around with the frequencies a bit.

A VST that I like to use is MaxBass by Waves. This plugin can actually perform this effect as well.  It’s one of my favorite plugins to help thicken snare drums! Here’s what MaxxBass looks like: 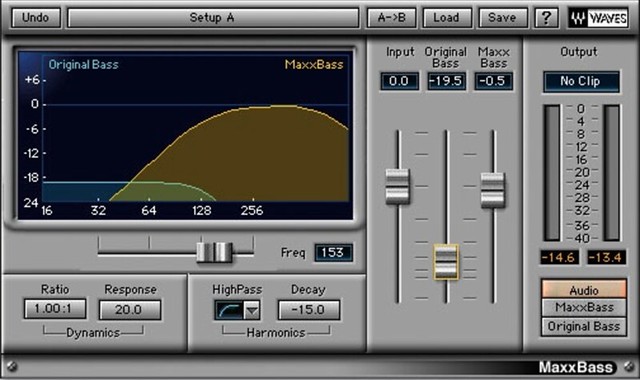 One problem with many drum samples and programs is that the top end of the cymbals and crash end up losing a lot of their power and feel thin and brittle, like they’re made of paper. One thing to counter this is to open up an EQ and start cutting out the super high end frequencies, and get a bit more focus in the higher midrange frequencies. I generally have the low pass filter start at 10000hz and adjust with the levels from there. After you’ve EQ’d out the brittle highs it can also help to add in an exciter or a treble booster to bring some of those more pleasant sounding frequencies – use the exciter/booster sparingly though as it can start to create unwanted distortion and make it very sound artificial, very fast.

Ultimately playing with a live drummer would be the best option, but isn’t always a possibility in the world of bedroom musicians. Sometimes, we just need to make do with what we’ve got at hand and if it involves MIDI drums and using some tricks to add intentional imperfections to simulate someone playing then so be it.  Programmed drums don’t have to be the evil we make them out to be, they can be useful for getting ideas developed and helping to learn as well as provide a way to not listen to that relentless tick of the metronome when working on timing and things of that nature.

I hope this article was helpful, or at least interesting! We upload new articles daily so if you liked this one, make sure to check out some more!

Also, for more recording tips, check out our other article: 5 Tips for Guitar Mixing!

This article was written by Keegan Connor, our editor located in Canada.