Meshuggah introduced 8 strings to metalheads around the world, but Animals as Leaders transformed the way we look at them entirely. AAL frontman Tosin Abasi has combined a jazz theory background and a love for metal and electronic music into the innovative new techniques and sounds we never thought possible.

In this edition of Geared, we take you through Tosin Abasi’s rig!

While Tosin has an extensive collection of guitars from various brands, Tosin is a long-time Ibanez user, starting with the RG2228, and eventually developing his own signature models: the TAM100 and the TAM10. While the TAM10 is a more budget-friendly version of his signature model, the TAM100 is a high quality, Made In Japan Ibanez that you can see Tosin playing on tours all across the globe.

The TAM100 is based on the RG2228, but with both visual and practical differences. The biggest differences are the variety of tones available, due to an H-S-H setup with Tosin’s signature DiMarzio Ionizer pickups instead of the stock H-H EMG 808’s, as well as a coil tap switch for the neck and bridge pickups. The tone woods have changed as well, and while the basswood core has remained the same, a flame maple top has been added in addition to a new 8-piece wenge/bubinga neck. Tosin felt that this wood combination gives him a lot more clarity, enhanced mids, and a tighter low end. A lot of people seem to think Basswood sucks. Tosin disagrees with you. You can read more about why Basswood doesn’t suck here!

The neck profile is virtually identical to the RG2228, but both the neck and the body are thinner to enhance playability and reduce weight. To round out the enhanced playability of this guitar, there is also a contour on the back of the lower horn to allow for effortless access to the upper frets.

More recently, Tosin has developed an entirely original, unnamed new prototype with Ibanez. While these are by far his most played guitars as of late, they are still somewhat of a mystery when it comes to specs. There are currently two versions of this new prototype with nearly identical specs, one in black and one in gray. These guitars were designed from the ground up, and incorporated some aspects of the ergonomics that he had found beneficial in Strandberg and Rick Toone instruments. Tosin has returned to the H-H setup – first with a Seymour Duncan Sentient and Pegasus pair (which we have an in-depth review of) and currently with a Fishman Pickups set – but that’s where the similarities to his previous 8 strings end.

The body shape is completely unique, and is both smaller and lighter than a typical 8 string, including all the Ibanez 8 string models prior to this one. While the body itself is thinner, it also is smaller and has many different contours and cutaways to allow for comfort in a wide variety of playing positions when seated. A bevel on the bass side of the body allows for an ideal angle into the strings for your picking hand and forearm.

In order to be both ergonomically and tonally beneficial, the guitar was built as a multi-scale (or fanned fret) instrument to accommodate for the change in tension and tonality the treble strings had as a result of the uniform 27’’ scale. In Abasi’s own words:

“I found that the 27-inch scale was great for the low end, but it slightly changes the tension for the treble strings. So the way around that was to create a compound scale or a fanned-fret guitar, which allows you to have a shorter scale length on the treble [side], and it progressively gets longer on the bass [side].”

(On a side note, StringDrop, our unique string delivery service offers progressive tension-based string sets. This gives you a lot of the same benefits of fanned fret instruments on any guitar. Get better tone now.)

The neck profile is asymmetrical and is loosely inspired by Tosin’s experience with Strandberg’s EndurNeck profile. The neck is thicker on the treble side than the bass side, with the concept behind it being based on the shape that occurs between your thumb and index finger as they pinch the guitar neck. The neck joint is highly unique, allowing for even better fret access than his previous signature models. Finally, the string spacing has been narrowed to make the 8 feel closer to a 6, while also allowing for easier muting control across all the strings.

In addition to his signature gear, Tosin owns many makes and models of guitar including PRS, Carvin, Aristides, Strandberg, Rick Toone, Godin, a variety of other Ibanez models, and much more. On all of his 8 strings guitars, his typical setup is using .10-.74 strings, tuned to Drop E. He also generally uses Dunlop Primetone .73mm Jazz III XL guitar picks.

Much like his guitar collection, Tosin likes to experiment with many different pedals, amps, and cabs, but the core of his live rig is the Fractal Audio AxeFX II. This allows him to have the ultimate in versatility, while still being able to use his favorite pedals, amps, and cabs live. He currently uses a mix of a PRS Stealth 4×12 (Celestion Vintage 30’s) and a Morgan Driftwood Vertical 2×12 (Celestion G12H Creambacks, or one Creamback and one Alnico Gold) cab on stage, with the addition of a Morgan SW50R head.

Tosin’s pedalboard is constantly changing, and he’s been seen in the past using both a Fractal Audio AX8, and an MFC-101, but the consistent piece on his board has always been the Boomerang III Phrase Sampler/Looper. The Boomerang III has been used extensively on previous tours to allow Tosin to layer several guitar parts to create deep musical textures throughout Animals as Leaders’ set. 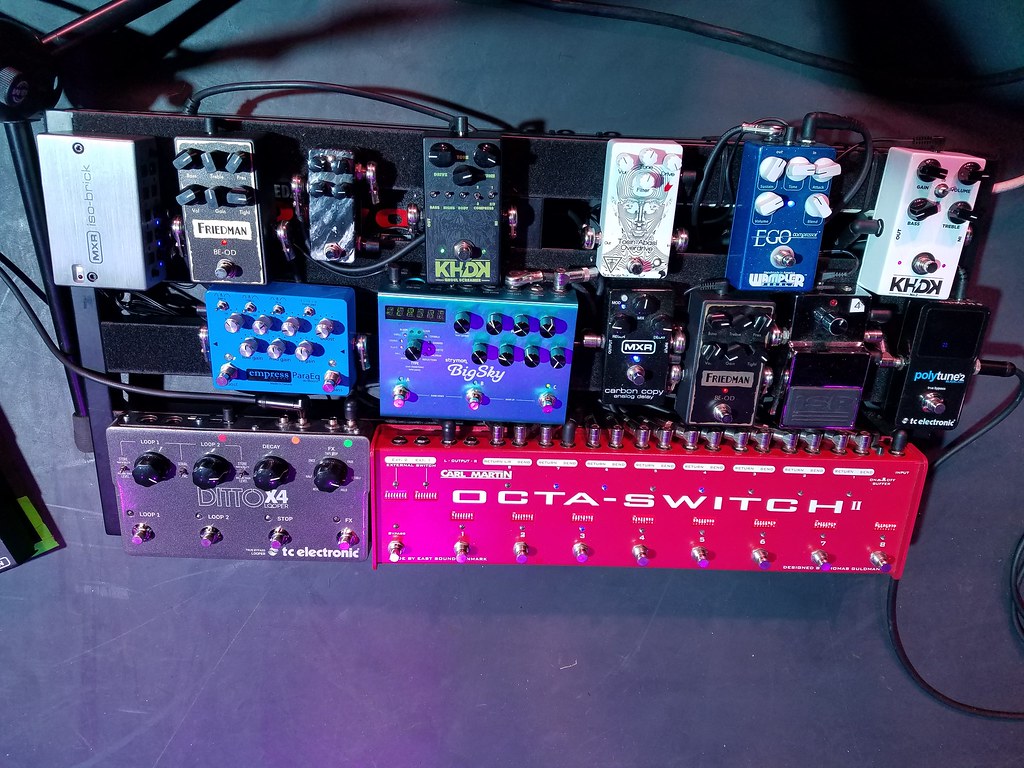 If you enjoyed this article, be sure to check out some more! We upload new articles, guides, reviews, and interviews daily, such as our Jake Bowen piece!