It’s no secret that a key component of getting a tight, aggressive guitar tone is to use an overdrive pedal in front of your amp.

For those of us on a budget, this is something we typically do in the digital realm using any number of free guitar plugins. It saves money, and it sounds pretty darn good.

But that really makes you wonder… is there a difference? Is one better than the other? Can I run a real overdrive pedal into a digital amp sim?

We’ll answer all these questions and show you how to get the tone and feel you desire!

Tonally, plugins are often just as good as the real thing. If you recorded a song twice – once with a real TS808 and once with a good plugin version – no one is going to know the difference enough to call you out on it, especially when boosting an already overdriven amp.

If the cork-sniffing, OCD tone chaser in you is skeptical as to how convincing digital tones can be, then there are always options to get your digital tone sounding like an analog holy grail.

Feel is another story. If you’re not used to digital modelers then you might find the way a plugin responds to your picking isn’t quite the same as you’re used to. Keep in mind that this isn’t a bad thing at all – it’s not worse, it’s just a different feel, and you can choose which one you prefer.

When all is said and done, no one listening to your record is able to judge the “feel” of the guitar tone you used, but you will. If it hinders your playing one way or the other, it’s probably worth switching to the alternative to make the process more enjoyable for yourself.

It’s worth noting here that if you’re big into the “dying battery” sound with your gain pedals, then obviously a plugin isn’t going to do it for you. The flip side is that a plugin will be far more consistent in tone and feel as a result – it isn’t changing because of battery life or a drunken bass player bumping the knobs!

The resulting background noise from using an overdrive is not going away anytime soon, however, there can be a big benefit in going digital. If you look at digital modelers like the AxeFX, the overdrive models DO NOT add their own noise like their physical counterparts do.

Any time we add gain/overdrive/distortion to our signal we increase the amount of unwanted background noise, also known as “hiss” or “hum.”

But here’s the difference… while both analog and digital units amplify the noise that’s already present in your signal chain, analog gear also introduces its own additional noise.

Sometimes it’s noticeable, and other times it isn’t. But the one thing we can say for sure is that by removing pedals from your chain, you cut off a lot of potential for introducing noise through bad wiring, bad power, ground loops, dying batteries (unless that’s the sound you want), noisy power supplies and more.

Some designs are better than others, and many analog overdrives are surprisingly quiet. Even the louder ones – between noise gates and editing – allow you to get most of that noise out of the final product, but it’s worth considering all the same.

Most overdrive plugins are just copies of the same Ibanez TS808. It’s a good sound to have, but it’s hardly known for being versatile.

While the benefit of working in the digital realm is your ability to modify and create unique sounds through a variety of tools, it can be tricky to do so. Unless you have a thorough understanding of how an overdrive pedal works, how to build one, how electronics work, etc. you’re going to have a hard time tweaking your TS808 plugin to sound like something it’s not.

Not only that, but you’re stuck in a box!

You can switch guitars, amps, or amp sims, but the signature sound from that plugin is always going to be there on some level. You’ll always have part of that sonic character you can’t get away from. You’ll probably have to deal with a couple of the same frequency issues when EQing guitars too.

So many of these overdrive plugins just do one thing. I’ve never seen one as versatile as I want it to be.

If you’re happy with that one guitar tone for the rest of your life, more power to you. If you want to grow and have a wide range of sounds available to you, then investing in a versatile pedal is the way to go.

If you’re anything like me, the tone you had last year (or even last week) isn’t the same as it is now. You grow, you get better, and your tone should too.

I know, pedals cost cash, but in the long run, you could actually be saving money… 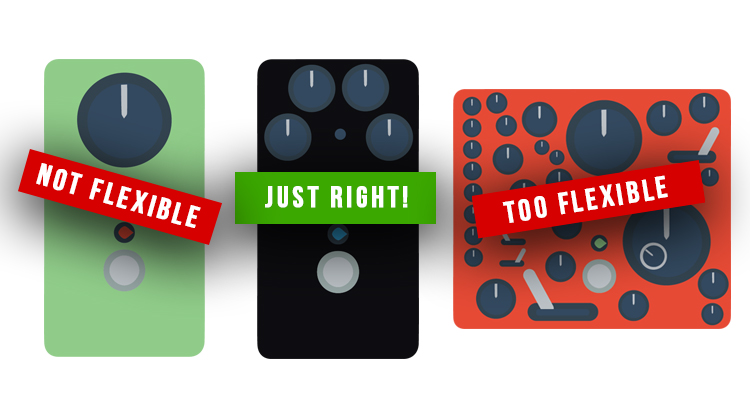 Bang For Your Buck:

As we’ve established, if you just need one overdrive sound (maybe you’re just making demos or just using it as a practice rig and tone isn’t that important) then plugins are definitely the cheaper option, by far. For most of us, however, being able to tweak our tone is super important.

Sure, you could get other overdrive plugins, but most of the ones that actually sound good aren’t sold on their own, they’re sold in $300+ bundles. That’s a lot of money for just another overdrive sound. Even if you don’t mind the price tag, you still don’t get the pick response and extensive features of the real deal.

You know what the worst part is? If you outgrow the sound of that free plugin, you can’t even sell it to offset the costs of a new one!

When it comes to versatility on a budget, the Precision Drive is what you need. It has extensive tone controls, adjustable attack and low-end punch/tightness, and even a built-in noise gate! It’s like having a dozen different overdrives in one box. But don’t take our word for it – listen to Pete Thorn’s demo instead!

Considering the price tag on it, it’s a much better option for versatile overdrive tones than spending $1,000+ on software bundles just to get a few slightly different emulations of the same 808 pedal.

There is a middle ground approach to the analog vs. digital argument, and here we have a perfect example of it. You can, in fact, run a real overdrive pedal into your audio interface or hardware modeler. This gives you the pick response you love, the versatility you need, and keeps costs down.

If you have a unique overdrive pedal that you can’t quite recreate in the digital realm, are partial to the tone and feel of the real deal, or want versatility on a budget, this is a great way to satisfy those needs while getting a touch of the analog realism cherry-on-top.

Whatever your choice, now you know what you’re getting into. Happy tone-chasing!