I can’t even begin to count how many times I’ve heard people complain about their guitar tone.

They always mention things like their gear not being expensive enough or not having the right pickups or needing better guitar strings.

Then they get the tone they want and proceed to complain about playability. Their guitar action is too high, their strings are too heavy, frets are too small, the list goes on!

These can all be factors in tone and technique, but one key component is highly overlooked… your guitar pick.

We’ve neglected the importance of an essential tool. Your pick (or plectrum, for those of you “across the pond”) is the first point of contact between you and the string. It’s what creates the actual sound of your instrument, it’s your tool to make strings and frets become notes and music, everything else is just there to capture and modify that sound.

While all aspects of your rig are important, your pick is what dictates the raw sound coming from your hands and being sent through your setup. The closer you get to your sound from the very beginning, the less time and money you’ll have to invest in the rest of your gear to get “that sound.”

WHY DOES A PICK MATTER SO MUCH?

There are 5 components to consider when choosing a guitar pick:

Each of these parts contributes to either your tone, your playing, or both. We’re going to break down each component, explain their impact, and how you can get the most from your picks.

The tip is likely the part of your pick that will make the biggest difference in your tone. There’s two different factors in determining the tip of the pick: the sharpness of the point and the bevel 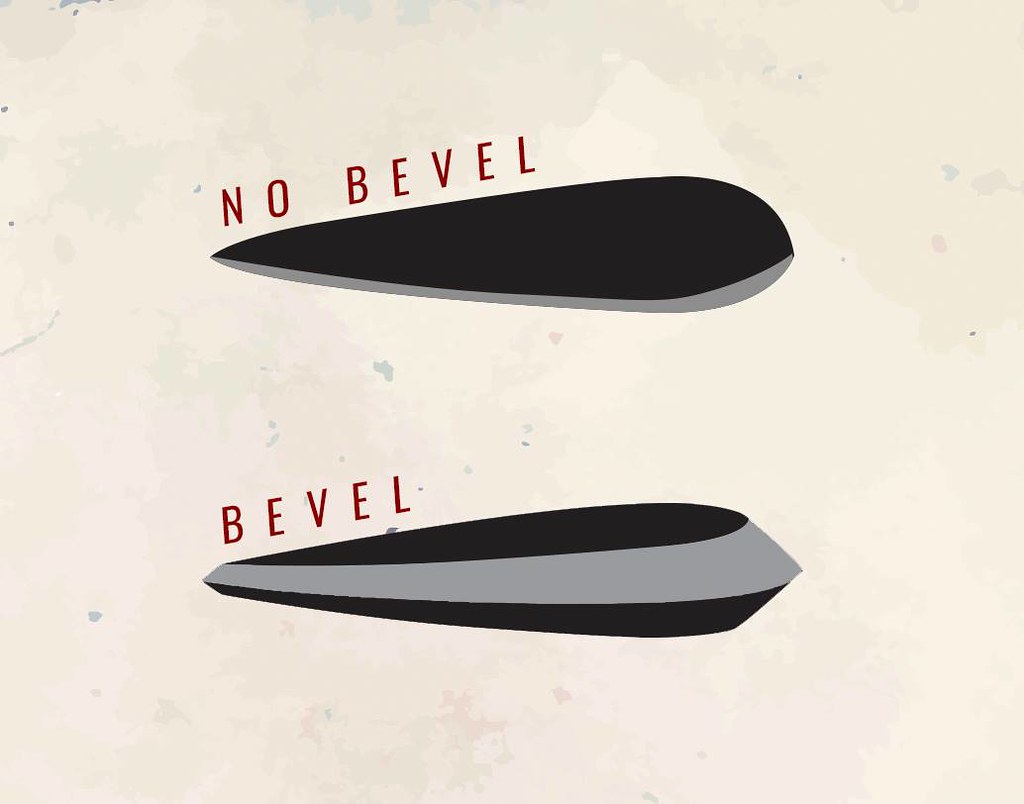 .
The sharpness of the point is responsible for the attack and brightness of a pick, while a bevel can help aid in how a pick glides across a string.

You can use this image to give you an idea how different tips compare to a standard guitar pick – with sharp on the left, standard in the middle, and rounded on the right: 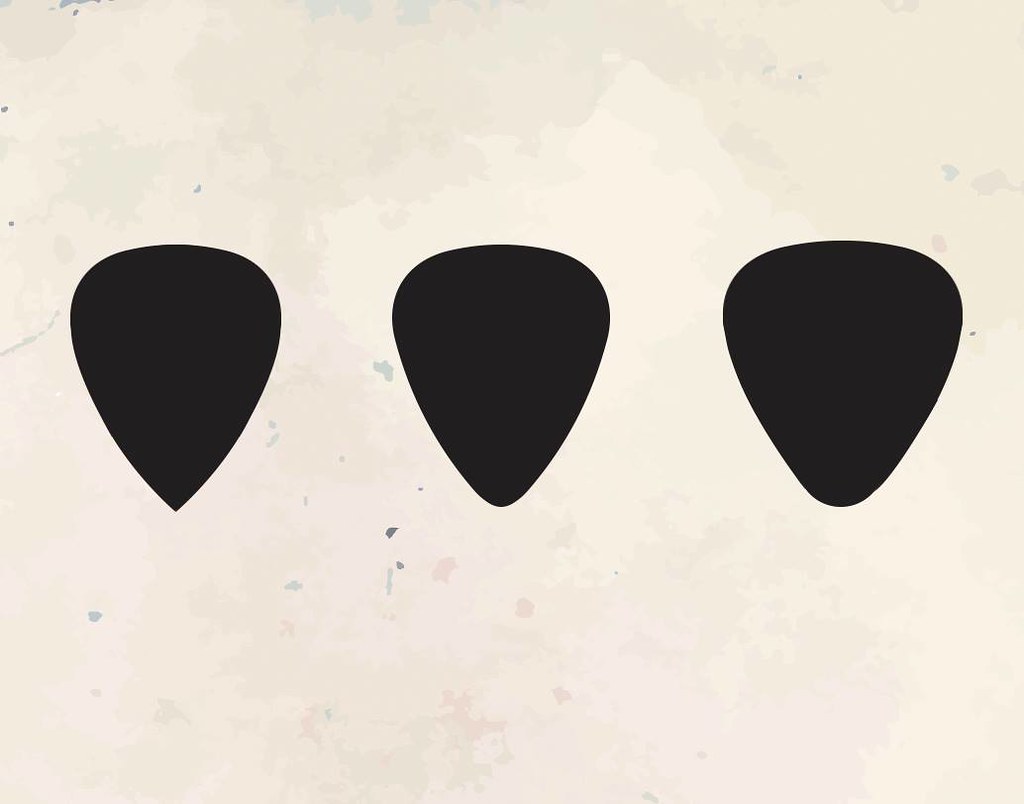 The sharper the tip of your guitar pick, the more attack your notes will have. They don’t glide across the string as much as rounded tips, they grab it and cause more “snap” and “spank” as a result.

The resulting sound is brighter, more articulate, and also greatly increases the clarity of each note. During faster lead playing this can help each note stand out more and sound less like a flurry of smooth but unintelligible notes.

This increased attack also enhances the rhythmic element of your playing making note groupings far more obvious and evident which can be fantastic for genres with a strong emphasis on rhythms such as progressive metal, metalcore, deathcore, technical death metal, and more.

On the other hand, a more rounded pick provides a softer, more fluid pick attack, and a darker sound. It allows your pick to glide across the string easier and has a more legato sound than sharper tips.

A standard or rounded tip will have a longer attack, adding a bit of a “scraping” sound to your pick strokes. This can also cause more of a tonal difference between an upstroke and a downstroke because a sharper tip has the potential to minimize the differences in the way the tip interacts with the string on different strokes.

While the actual size of a pick might seem like purely a physical preference, it has a significant impact on your tone. So yes, gentlemen, size does matter this time.

To give you an idea of “standard” sizes, here’s a visual guide: 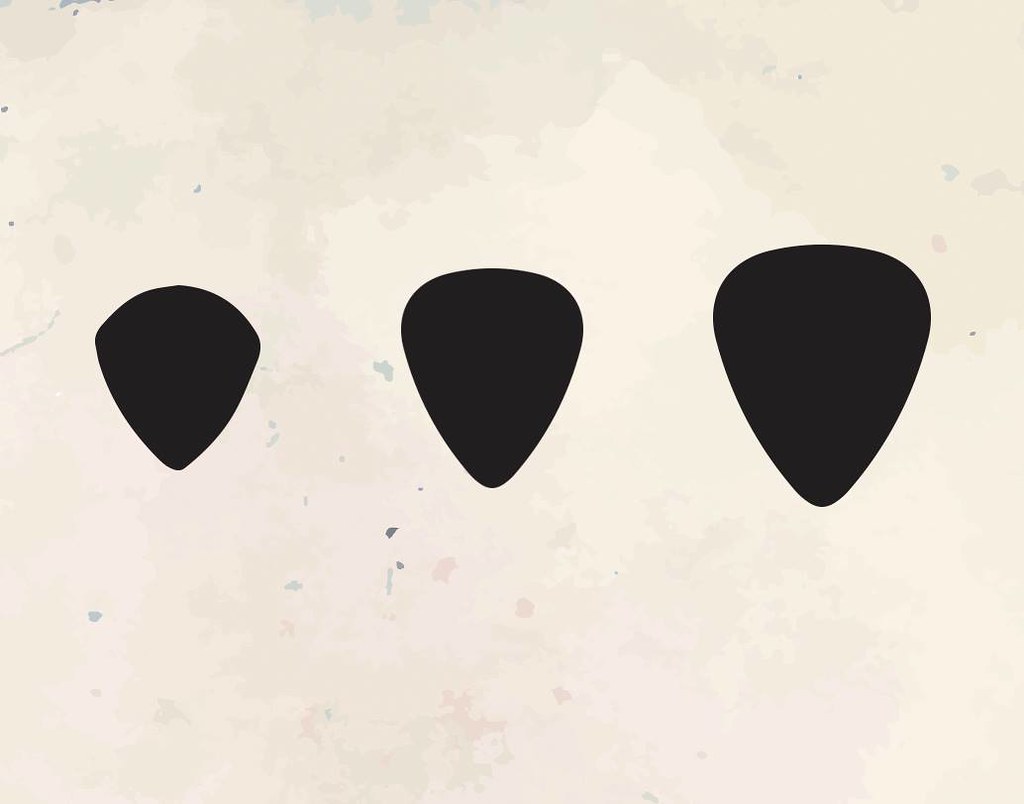 The basic idea is just simple physics. None of us get very excited about math, so we won’t get too detailed on this one. If you’re using a smaller pick, you have less transfer of force behind each pick stroke.

Hold out your left hand in front of you with your palm open, facing you, as if you’re about to high-five yourself in the face. With your right hand, start punching your open left hand with enough force to make an impact, but not enough to hurt yourself. Part way through, change from a full fist to just using your index finger (essentially poking your hand) without changing the amount of force you’re delivering with your right arm.

The force being created by your right arm is the same every time, but you can physically feel how the force that is being transferred to your open left hand is far greater with a fist than with the tip of your index finger.

This same concept applies to your picking technique. A bigger pick means a larger object is hitting the string, allowing for a stronger transfer of force and power to the string itself.

A smaller pick lacks this transfer of force, but the upside is that it allows for economical and fluid lead playing. Anyone who has tried a Dunlop Jazz III knows precisely what this phenomenon feels like.

It’s as simple as this: the smaller the object, the less force required to move it. Think of this as the difference between throwing a golf ball and throwing a basketball ball. Obviously, the golf ball is far easier because you can use less force to throw it.

Guitar picks are usually measured in millimeters, with the most common sizes ranging from .5mm to 1.5mm and more specialized picks going up to or even well above 5mm.

Believe it or not, thickness is far more important than just how stiff you want your pick to be. We’ll start with the obvious… the thicker the pick, the less flexible it is.

This is why many lead players prefer 1mm picks, once your pick is past the string the note will sound. With thinner picks, your hand may have pushed the majority of the pick past the string, but because it is thin enough to bend and flex the tip of the pick may still need more movement before it pushes through the string fully.

The long and short of it is that thicker picks require less movement to pick a note, making the economy of movement a big plus for shredders.

The attack changes with thickness as well, with thinner picks having a more “papery” attack than their thicker counterparts. When playing chords, the flex in thinner picks can also result in a slower attack across all of the strings. The sound becomes bigger, heavier, and more laid back rhythmically, putting you ever so slightly behind the beat.

Now for the part that most guitarists have not realized… Thickness directly impacts your tone as well.

Take a .73mm pick and a 1mm pick of the same kind (shape, size, tip, material). If you play them back-to-back you’ll notice that the thinner picks have more clarity and openness, while the thicker picks have more low-mid bloom and thickness

This is hugely overlooked.

If note clarity and rhythmic definition at high tempos matters to you, you’re much better off going with a thinner pick somewhere around .73mm. If you want a thicker, rounder, sludgier tone, 1mm or more will do just fine.

The materials used to create a pick can subtly or drastically change the way it interacts with the string.

For decades the most common materials for guitar picks have been various forms of plastic or nylon, but in more recent years we’ve seen a large number of unique materials including glass, stone, metal, and way more.

There are way too many materials out there to cover every single kind used to make guitar picks, but we’ve taken the most popular ones (and a few niche materials) and broken it down to a simple graphic for you.

(PLEASE NOTE: This graph assumes that all the picks in question are of identical specs in all other ways – thickness, size, grip, tip shape, etc. as changing any of these factors could easily change the placement of these materials when comparing two different picks.)

Grip is the only part of the pick that is purely about playability and not about tone.

There’s a large number of unique grip types, but they can be broken down into three fields: textured, smooth, and finger grip.

The more texture your pick has, the stronger the grip you’re going to have on it. While this may seem like a no-brainer, it depends on your personal preference as a player whether you like a pick that doesn’t move in your hand, or if you prefer the ability to shift your grip as you play.

Some people like to tuck their pick away for two-handed tapping part or change the pick angle and grip based on the part they are playing. This is when the “grippiest” pick might not be the most ideal.

Let’s get back to the types of grip:

Smooth picks would include pick types like Fender’s Standard 351’s. These have little to no attempt at adding friction or grip whatsoever, which again, is not necessarily a bad thing.

Textured is typically any attempt to change the construction of the pick to add grip – this includes raised logos (like on Dunlop Jazz III’s), indents or holes (Swiss Picks), and even the use of different materials to increase grip. A perfect example of this is Winspear Picks and their use of UHMWPE.

(PRO TIP: If you’re curious about this material and other ergonomic pick designs, our String Drop string include a FREE Winspear pick with every order!)

Finger grip is what you see on many thumb picks and finger picks typically used for acoustic music styles and other stringed instruments like banjo and mandolin. However, they can be seriously handy for guitar players too.

A quick search on Google will show you several standard guitar pick shapes with this finger grip design, allowing you to have consistent pick placement with the added bonus of making 8-finger tapping much easier to navigate as you don’t have to worry about where to hide your pick during those two-handed passages.

The last aspect to the grip is taper vs. flat profiles, which is illustrated below: 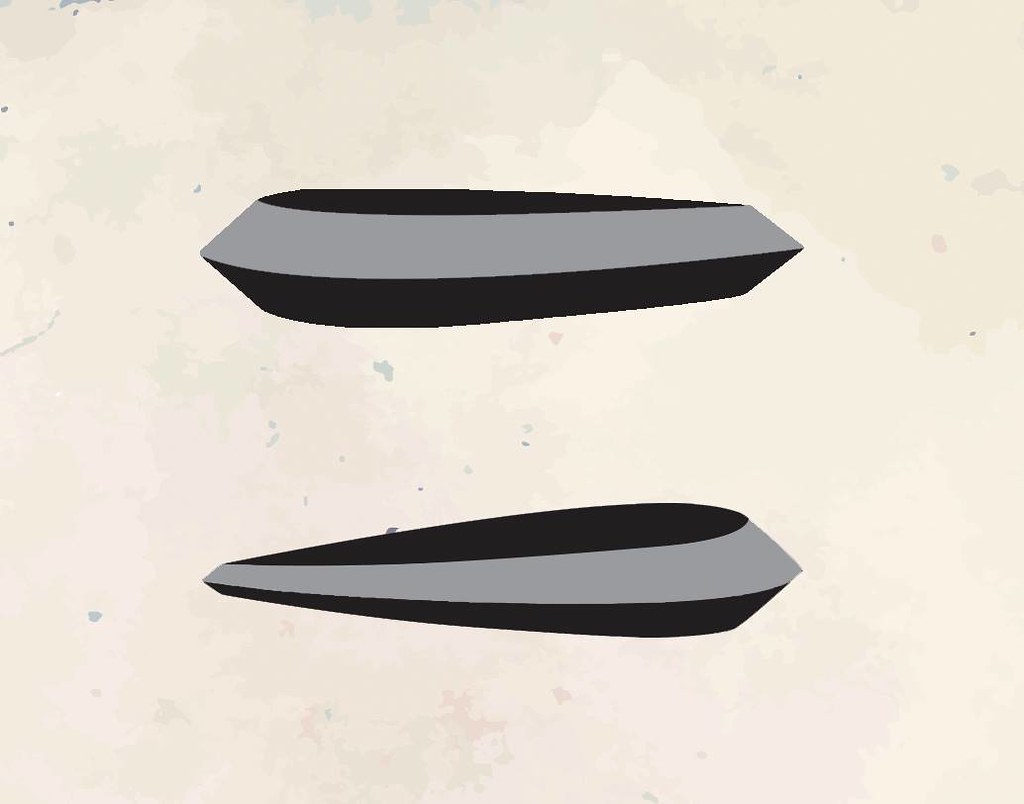 A tapered profile is said to be more ergonomic, but because some do not enjoy the different feel as much as others, which is why companies like Winspear offers both tapered and flat profiles for all of their guitar picks.

There are far too many picks out there to cover them all, but these basics will give you all the knowledge you need to diagnose what you like and dislike about any pick you come across, allowing you to get the exact tone and playability you desire.

This article was written by Connor Gilkinson, our editor located in Canada, with the help of Tom Winspear of Winspear Picks.