We couldn’t possibly skim over Ibanez’s cute little toy of a guitar, could we? The Ibanez Mikro series guitars are designed for our little brothers and sisters in the days when they’re first becoming micro-shredders.

However, is it actually a decent starter instrument, or just something we all pick up in Guitar Center and show our buddies how easy it is to play sweep arpeggios on? Is it really just a silly toy or does it serve a purpose?

We’d be lying if we said these were great pickups. They’re harsh, but surprisingly they aren’t muddy like most stock pickups in budget guitars. One thing is for sure, Poplar will not be our wood of choice on our next custom Mayones build…

The tone of this guitar can only be described with a hint of a smirk. It’s not as awful as you would think, actually, and considering this guitar costs less than some hardshell cases we’re reluctant to say that it’s actually mildly impressive.

It’s quite midrangey with not a lot of low end, it works for tighter guitar tones but if you try and get a thicker sound it just sounds like a mushy low-end mess, like the low end is separate from the rest of the guitar tone.

In short – it does one sound, and it does it… decently. You won’t be impressing anyone, but it’ll get the job done. It could certainly be worse!

I will say I’m surprised at the build quality of this instrument. You wouldn’t think something so cheap would be so far from bursting into dust at a moment’s notice, but it is. It’s roughly comparable to Ibanez’s budget lineup like the RG321.

The worst offense you’ll find in terms of build quality is the fret ends, which should be no surprise to anyone who has played a budget instrument.

Otherwise, we’re dealing with a build quality that’s not too bad at all. All the parts are nice and secure, no wiggle room between parts, no finish flaws either. 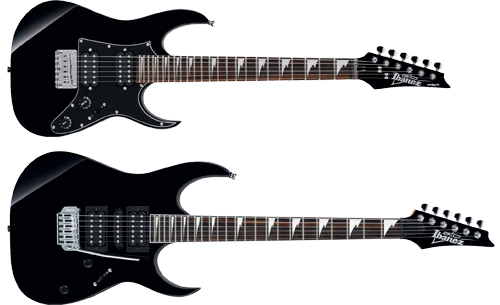 (Size comparison for reference against a 25.5’’ scale length Ibanez)

Anyone who is used to playing a full-sized guitar will have a blast on this 22.2’’ scale length, it’s like instantly becoming Jason Becker for a short time. Insane interval stretches and giant jumps made easy, although your fingers are likely going to get a little crowded on the higher frets.

It feels like a good neck for any of our smaller shredders-to-be out there, it’s not too thick or too thin for the overall size of the guitar and it lives up to the Ibanez reputation of a fast neck.

So why are we even reviewing this guitar? This is kind of a joke for anyone who has been playing guitar for any amount of time, sure… but it honestly does have some great uses, and we wanted to review it not compared to nicer full-scale guitars, but for what it is.

Putting some nicer Seymour Duncan pickups in it resulted in a much-improved tone that really wasn’t much to complain about. That alone changed the Mikro from a toy to a potentially very exciting project guitar!

You can swap pickups, repaint it, put in locking tuners, try routing it out for a tremolo, whatever you want!

If you’re new to guitar modding or electronics, this is a perfect cheap canvas for you to have a go with. It really doesn’t get much cheaper than $150 for a guitar, so if you’re looking for a practice piece it’s hard not to recommend the GRGM21.

For young beginners, this is also a great choice. As much as we complain about the tone, that’s not something anyone starting out will care about or even be able to make an informed opinion on. In which case, the build quality and playability are the only remaining factors, and they’re pretty darn good selling points for someone looking at their first 6-string.

In all honesty, this makes a great gift.

Whether you’ve been playing for $30+ years or you’re just starting out, it’s simply impossible not to see a smile on someone’s face when they get one of these. Whether it’s just a fun joke gift or a serious one for a beginner, this is something even the team at Wired Guitarist agree would be a great Christmas gift.

We tossed around ideas of remaking our favorite guitarists’ signature instruments in Mikro form, going nuts and sticking some EMGs and a Floyd Rose on it, or even letting it be the guitar that Dad will let the kids paint for him.

If you’re looking at short-scale instruments for whatever reason (as a gift or for a young Malmsteen), this may be your best option. It’s easy on the wallet, the build quality is half-decent, and despite its flaws, it’s ridiculously fun to play.

While this will never be put in the same league as full-scale instruments for most of us, considering what it actually is, it’s really deserving of this rating.