Traditional guitar strings have been around for decades, but today guitarists have far more options when it comes to string tension. Not only can we choose from a wide variety of gauges and material types, but now each set can provide its own unique impact on tension across the strings.

So are they all bogus? What’s “progressive tension”? If guitar strings have worked for decades already, why should I switch? All great questions, let’s dive in.

The standard off-the-rack guitar strings you’ve been buying for ages are good enough for all your guitar idols, I know. However, just because we’ve used something for more than half a century doesn’t mean that they can’t be improved!

If anything, it means that the technology is long overdue for an update. Decades of scientific improvement have gone by and yet we’re still using the same strings? Yikes… I know most of us are probably happy with our 50+-year-old technology… but we could be happier. 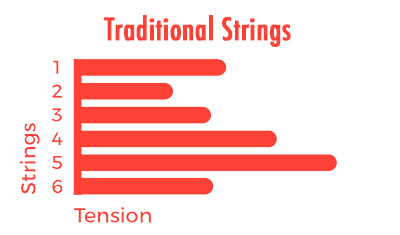 “Why does tension matter, though?”

A looser string will tend to go very sharp when initially hit, and then settle back into tune. The higher the tension, the more consistent the tuning of that string will be when it’s played, minimizing the the amount of “pitch bend.”

On top of that, thicker strings tend to sound more round, darker, and produce less harmonic content. The result can sound “dull” and lack in clarity. So, using a thicker string for more tuning consistency is a trade-off.

Our lowest notes need the most tension, yet your low E string doesn’t have as much tension as your A string with a traditional string pack… doesn’t make much sense, does it? So you end up with a low string that doesn’t stay in tune, a bit of an odd feeling jump between all of your strings, and a slight impairment to your tone.

In short, traditional guitar strings totally get the job done, but they are not without their flaws, which is why modern innovations have sought out modern solutions. There’s always room for improvement!

A newer development, balanced tension aims to keep the tension across all the strings roughly the same. This means that when you go from one string to another you should feel a similar performance under your fingers. 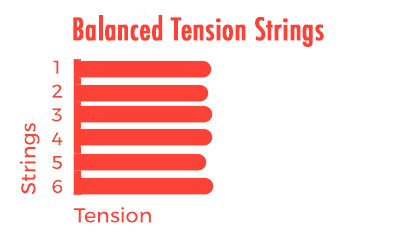 Many people ask if balanced tension will have any benefits on the instrument itself, whether it will be easier to set up, have improved tuning stability or have more even action across the neck… the short answer: no.

Balanced tension strings primarily focus on the feel under your fingers from one string to the next rather than any kind of tonal or other practical benefits. The idea is that by having a consistent “feel” between strings that you might have more consistent technique across the fretboard.

These strings tackle a very common request of rock and metal guitarists who tune down low. Typically these players want heavier strings on the bottom so they can play hard and tune to drop tunings while still having a good amount of tension and pitch stability, while the higher strings stay looser so they’re easy to bend.

While this is indeed a popular solution to a widespread problem, it too has its own downsides. It lacks any consistency between the feel of the strings as mentioned earlier. It’s an even more off-putting feel than a traditional pack of strings because of the larger change between the D and G strings! 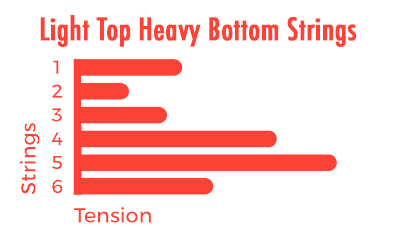 So, while it’s one step forward, it’s another step backward. Depending on your priorities this might be a trade-off that’s worth it, but to others, it may feel like running in circles.

Here we have the best of everything! Progressive tension is similar to LTHB, but with additional benefits and a smarter execution.

Progressive tension strings achieve the same easy bends and tight rhythm parts by using heavier tension on the bottom and lighter tension on the top, but the difference is that it does so… well… progressively!

Rather than simply taking two sets of string gauges and mashing them together, they look at each individual string to make sure the tension increase happens over time, minimizing the awkward jumps between strings. 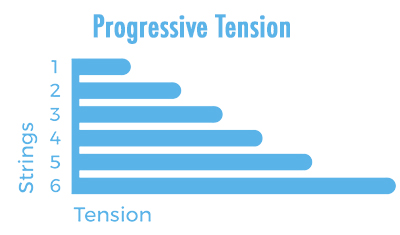 Progressive tension was created to mimic the benefits of a multi-scale guitar without needing to spend thousands of dollars on a custom instrument. This means you can achieve all the great tonal and practical improvements at a fraction of the cost!

(By the way, we actually loved this idea so much that we made our own brand of progressive tension strings. String Drop is cheap, ships internationally, made in the USA, and even comes with free stuff! These are just a couple of the benefits of String Drop, you can read about the rest on our website!)

It is worth mentioning that this is something primarily helpful for players who play rock and metal, or who tend to play in lower tunings like drop tunings or even standard 7 or 8 string instruments. The benefits you see from these strings might not be so helpful to you at a jazz gig… but you’ll never know until you try!

Which Strings Are Right For Me?

The only way to find out it is to try the strings for yourself. You’ve already tried traditional sets, so take a look at what sounds most appealing to you and take the plunge! Even the strings with the most solutions might not be what you prefer, and that’s okay, but you’ll never know until you take the leap. Luckily for us guitarists, it’s a very small financial leap to try new strings, what’ve you got to lose?

When all is said and done any set will do the job, but don’t just “do the job”… strive to be better than the rest!