Welcome back to another publication of Wired Theory! We’re going to dive into building scales. This will be part of a multi-week series and we will dip into chords along the way, so I’m thrilled to have you all on board.

If you have not read last week’s article on Intervals, I HIGHLY advise you do so in order to understand the terminology and have a basic understanding of Intervals.

So what exactly are scales? They are more than just fancy patterns you can shred. Scales are a collection of notes ordered by pitch. Scales can have a different number of notes; however, each letter is only used once (aside from a few non-traditional jazz scales we’ll look in the future). Scales in western music incorporate either 5 notes (pentatonic scales) or 7 notes.

The way we define most scales is by using whole steps and half Steps.

The most common scale is the Major Scale, which is built with the following intervals:

Once you hit the 7th note, you go back to the octave.

This means that every single major scale follows this formula, weather it’s the C major scale:

For example, the intro to Ozzy Osbourne’s “Mama, I’m Coming Home” incorporates a descending E major scale played by the 12-string guitar (the guitars are tuned ½ a step down, so it sounds like Eb Major). Let’s take a look:

As we can see above, the guitar is playing a descending major scale:

Generally, major keys are supposed to be happy.

It really helps to know your key signature on top of your intervals, so you can properly name your notes.

When it comes to minor scales, the same concepts apply, except you spell your natural minor scales:

Again, you repeat the octave at the end.

Therefore, our A minor scale consists of: A-B-C-D-E-F-G-A.

To hear a song in a minor key, in this case C minor, take a listen to “Rose of Sharyn” by Killswitch Engage.

Notice how the C major and A minor scales have the same notes? Referencing back to our article on Key Signatures, this is where our Relative Minors come into play.

Relative Minors are scales that share the same key signature. Therefore, in theory, you can substitute the scales.

If you notice, the differences between the major and minor scales are the third, sixth and seventh intervals.

We refer to each note as a specific scale degree, or the name given to a particular note of a scale to specify its position relative to the tonic (the main note of the scale). These name become important when it comes to chords as well.

The important degrees to focus on for chord building are the tonic, median, dominant and leading tone, as these notes help define qualities.

The seventh degree, in a similar way to major scales, becomes a leading tone to the tonic because it is now only one half-step lower than the tonic.

To build a harmonic minor scale, you use this formula:

The harmonic minor is generally used when going back to the tonic, since the addition of a leading tone pulls the melody back home.

When played over the dominant chord (V) in a minor key, the harmonic minor scale also reinforces the leading tone in the chord, which is raised to keep the V chord dominant.

The traditional melodic minor takes the first half of the natural minor scale and second half of the major scale when ascending.

However, when descending, it becomes the natural minor scale in it’s entirety.

It adds a ton of textures to your music, and when used correctly can really change up your lead work.

Your Traditional Melodic Minor Scale is built like this:

The other form of the melodic minor scale is the Jazz Melodic Minor, which defeats the the fact that a scale can be played differently while descending.

To build the Jazz Melodic Minor:

Both up and down.

Depending on the kind of music you write or the style in which you try to use these scales whilst improvising and composing, both are right. It depends on the chord structure and harmonic content that should direct you to use one or the other, however, since music is purely subjective you could in theory do whatever you want. Weather or not it will sound good is another story

I’ve put together an exercise to help you understand the difference between these scales that you can view below: 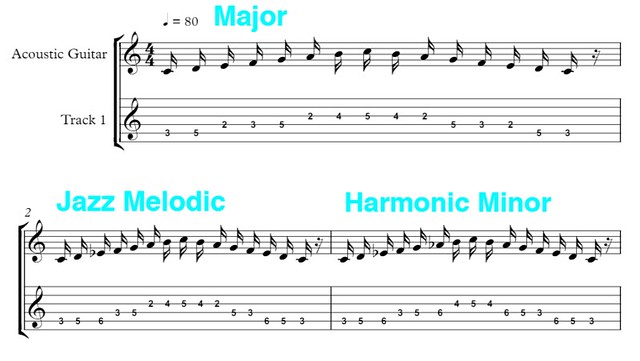 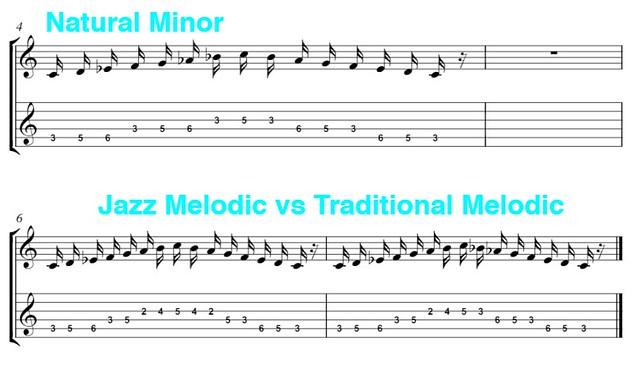