When you think High Gain, Yamaha might not be the first name that runs through your head.  This was my dilemma as well, when hearing about the new Yamaha THR10X.  According to Yamaha, the THR10X was designed to provide “extreme high gain” tones in addition to less stack-like responses. Perfect for any desktop, with a modest 10-watt output (5 watts per side stereo), this amp surprised me right out of the box with a surprisingly massive sound!   The amp contains Yamaha’s “Virtual Circuitry Modeling” (VCM) to emulate five channels from three amps, reverb, delay, and modulation effects. The amp is powered via an included AC adapter or eight AA batteries, and you’ll know when it is on thanks to the “Virtual Tube Illumination” glowing from behind its’ metal grill. Another small button operates the delay’s tap tempo function and the THR’s built-in tuner and a small LED display shows the active preset number, also providing tuning and tap tempo rate information. 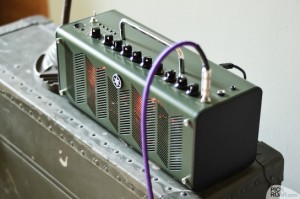 Unlike it’s counterpart the THR10C (More classically voiced for rock/blues players), the THR10X focuses on the high-gain territory that metal and hard rock players prefer.  Let me tell you what, this little amp doesn’t do much to disappoint.  The THR10X offers Power I, Power II, Brown I, Brown II, Southern Hi, Clean, Bass and Flat models straight out of the box. The VCM effect models consist of chorus/flanger/phaser/tremolo/digital delay selected by the effect knob, all of which sound surprisingly good!  The amp includes five memory locations can save front-panel amp, EQ and effect settings as well as parameters that are edited using a computer and THR Editor software (included), which allows players to tweak a variety of settings for noise gate, compression and the top-panel amp and effect models in fine detail, which requires a computer.  The USB jack also allows users to play computer audio file through the THR amp or directly record audio using digital audio software like Cubase AI (Also Included).  Jam along all you want, this might be the perfect home practice amp!

The tones from the Yamaha THR10x seem to be endlessly tweakable, but straight out of the box, the presets do little to disappoint. The cleans are shimmering and chimey, and reverb effects are simply staggeringly good for what this is.  The high-gain setting are where this amp starts to shine, however.  Incredible amounts of gain seem to come from nowhere and it’s loud enough that your neighbors will be calling the authorities in no time. 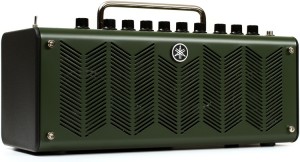 The Yamaha THR10x is quite possibly the most impressive practice amp I have ever played through.  One might say it would be immensely useful for studio tones as well.  It has endless tweak- ability, impressive high gain models, beautiful cleans and the effects are simply out of this world.  For $300 USD?  This is hard to beat, and while loud, I doubt it would be loud enough to stand up to any decent drummer.  Word on the street is that Yamaha is introducing the THR head unit this year, so if you are wanting something for live use?  Maybe save for that.  Until then?  This little amp deserves a serious look.

PS, don’t forget to check out our other articles! Click here.  Or, maybe you’re in the mood for a new guitar?