Welcome back to another publication of Wired Theory! We’re going to continue exploring scales and chords as we started last week.

If you have not read my article on Intervals, as well as last week’s article on Scales, I highly advise you do so in order to understand the terminology and have a solid foundation for this week’s lesson!

Alright, it’s time to talk chords. As with scales, chords are used in songs to outline the overall harmony. They are used in chord progressions, which can change or stay the same during the song.

What makes a chord a chord though?

A Chord is a set of 3 or more notes played simultaneously. In Western music, we define playing two notes simultaneously as an interval, where as 3 or more implies a full chord. Technically, chords with only two notes are power chords which only contain the root and the perfect 5th, however usually the octave of the root is played, making it fall on the line since it’s still only two different notes.

We build chords using thirds. There are other approaches in advanced jazz harmony, but no need to worry about that just yet.

So if we start with a C and count up a third to E, then again to a G, we have a C triad of some sort. However, that’s not enough information, as we have only defined the root of the chord (C).

Now we have to define it’s quality. Quality refers to being major, minor, augmented, diminished or dominant. Since we are working with triads today, you only need to concern yourself with the first four.

Let’s start with major triads. These chords, like their scales, tend to be happier sounding.

Some ways you’ll see major triads written are: C Major, C, and C Maj. When there’s no symbol or wording written after a root note, it is implied to be major.

Next up we have minor triads. These chords tend to be a bit sadder in tone and contrast major triads very well.

Ah, so we approach the augmented and diminished triads. These chords are tricky due to the fact that they are seldom if ever really used in popular music. Most forms of early music used these chords to evoke tension and help move the composition, and they are also scattered all over the greatest jazz compositions. You’ll find some in shred and true progressive music, as those genres are heavily influenced by non-modern genres such as classical and baroque.

The reason these triads tend to be harder to find is due to the way they sound. They contain a lot of tension and require resolution almost immediately. They don’t stand on their own too well in modern genres.

Augmented triads are built with two major third intervals on top of a root, or a major third and an augmented fifth.

Diminished triads are built with two minor thirds on a root, or a minor third and a diminished fifth.

Application to the Guitar:

Now, there are dozens of ways to play these chords, and we have not even touched inversions yet. Luckily, I’ve supplied a nice simple way to practice and apply these triads to the fretboard so you can hear how they sound in context. 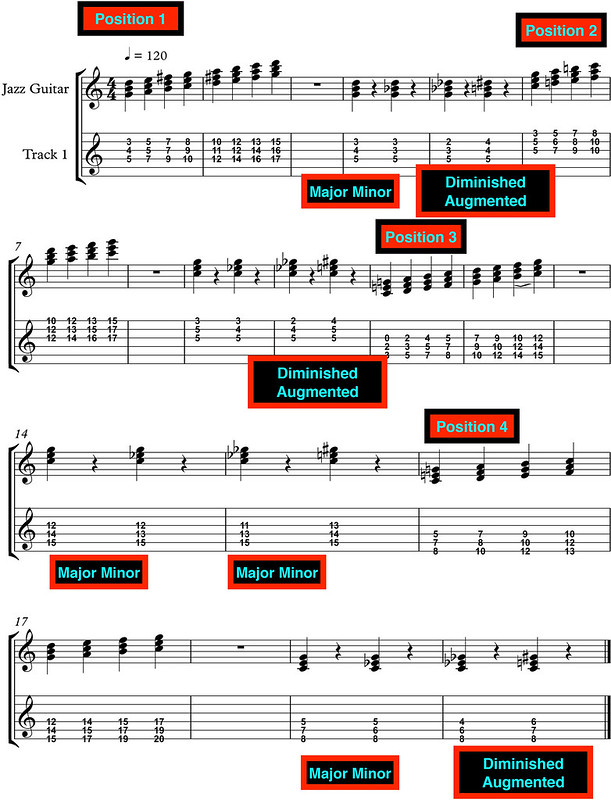