Jazz Chords I: Sevenths and Dominants

Greetings musicians, and welcome back to a long overdue edition of Wired Theory. This week I would like to treat you all to a little jazz theory and discuss tension chords. If you’re looking for ways to spice up your songwriting and use something other than major and minor chords, you’ve come to the right place.

Before you read on: Make sure you’re familiar with how to construct Basic Chords and understand Intervals prior to this lesson to get the most out of it and learn the terminology!

Say you’re listening to a nice jazz piece or film score and hear a pretty jarring chord or harmony, and then you hear the next chord and everything sounds “right” again.

What happened was that the composer took advantage of a note that does not fit in the typical triadic chord and then resolved it to release the tension that they previously built. It is an amazing tool for songwriting since it opens up a world full of new textures to compliment your compositions.

A tension note can be defined as any note outside the triadic harmony of chord added for taste.

The most common jazz style chord is a seventh chord. Referring back to our lesson on intervals, there is a major and minor seventh for every key, and for chords that remains true as well.

However, the “7th” is simply an intervallic number, and therefore means nothing on it’s own. We still need the quality of the chord in order to determine how we play the seventh.

In order to build a C Major Seventh chord, we first take the basic major triad C-E-G. Then, we simply add the major seventh interval on, which is a B. So, our CMaj7 is spelt: C-E-G-B.

For a minor seven chord, you could spell the correct minor triad, and then add the minor seventh interval as well. The same concept applies for the remaining types of chords.

The seventh is used in jazz to replace your standard chords and adds a new harmonic layer to the music. Try them out in your own writing and see how they play with your melodies!

Let’s analyze dominant chords for a bit before we move on. Dominant chords are special because they fall in between major and minor chords.

A dominant chord is built with the root-major third- perfect fifth-minor seventh.

A dominant chord will be written with the root letter followed by the number 7:

This implies a dominant seventh rather than a major or minor, which will always have a symbol to state its quality:

Let’s get technical and breakdown the dominant chord to understand how it works in context:

Theoretically, the dominant chord in music almost always goes back to it’s tonic chord in order to resolve the tension it creates.

This is because of voice leading, which is how individual notes or ‘voices‘ of chords interact, creating the progression from one chord to another.

Voice leading contains a series of rules but we won’t be going over that just yet, but it is important to know the term when analyzing how the dominant chord works.

The 3rd (B) and b7 (F) of G7 form a tritone interval (interval of 6 semi-tones). This is an unstable interval with a lot of dissonance and tension.

Due to the tension created, we need to resolve the tritone to their nearest neighbor note in the key of C major:

Those chords are: Dm7 – G7 – Cmaj7, just like our example above shows. Now you can hear how smooth the progression works and resolves.

C isn’t the only chord G7 can resolve to, here are some other options:

F#m7  (F#m7 would be the tri-tone substitute for Cmaj7, more on these later)

Play these chords yourselves to hear how they resolve and work! The best way to truly understand Jazz is to play some tunes yourself.

*Note* This is only one set of 7th chords, there are countless ways to play these chords, however these are comfortable and close in space making them easy to play while including all 4 different notes. THE ROOT IS ON THE 5TH STRING IN EVERY SHAPE. 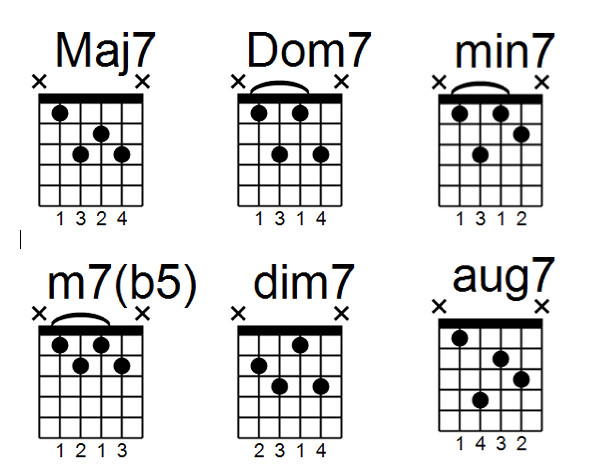 Next in the Jazz Chord series we will go over suspensions, 9th and 13th chords, and other fun advanced topics that will aid your songwriting and understanding of the musical language.

As always, never hesitate to reach out to me on Facebook. I will answer any questions you may have about any topic you seek answers to!